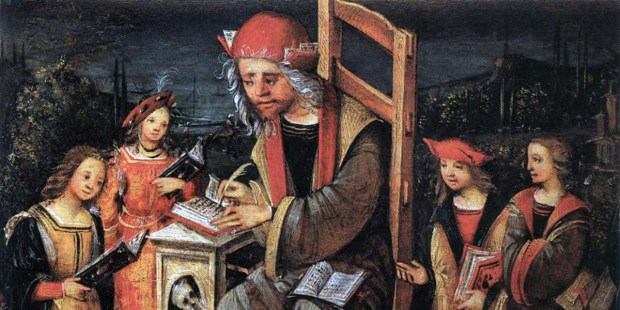 The 2020-2021 school year doesn’t look clear. But these examples of holiness remind us of what’s most important.

As schools around the world look to open for the semester, many teachers are experiencing far more anxiety than usual. Whether you’re going to be in a classroom this fall or leading students in distance learning, the 2020-2021 school year promises to bring more than its fair share of difficulty.

Fortunately, there are many saints who taught in challenging circumstances and whose witness and intercession can strengthen teachers this year.

St. Cassian of Imola (d. 363) is a comfort to most teachers who know that their worst days in the classroom could never be as bad as his. A primary school teacher despised by his students, Cassian was discovered to be of the forbidden Christian faith; he was condemned to be killed by his students. Some 200 disgruntled elementary students broke their tablets over his head, carved their names in his flesh with their metal styli, and finally stabbed him to death.

St. Rose Venerini (1656-1728) was an Italian woman who founded an order devoted to the education of women. This was opposed by priests who thought the women were attempting to usurp the priestly role, and by many who felt that the poor ought not to be educated or that a woman ought not to lead the way. Rose persisted, opening the first public school for girls in Italy; her order continues in this work throughout the world.

Venerable Teresa Valse Pantellini (1878-1907) was an impetuous socialite who became a Salesian Sister (despite her superior’s misgivings). After her formation, she was assigned to teach girls from the slums. Despite having a naturally strong temper, Sr. Teresa never once lashed out, even when a student spat in her face. She spent all her free time listening to the girls, praying with them, and loving them, whatever it took. Gradually, her love won many of the girls for Christ.

St. Miguel Febres Cordero (1854-1910) was an Ecuadorian Christian Brother, a teacher who was known for his kindness and commitment to his work. In addition to teaching, Febres Cordero wrote a widely-used Spanish textbook as well as other textbooks and books and articles on pedagogy, linguistics, and literature. His academic work won him renown, and Br. Miguel was eventually sent to Europe to focus on translation work.

St. Victoriano Pio (1905-1934) was a Spanish member of the Christian Brothers, an order devoted to Christian education. A talented artist and musician, the intense young man became a teacher and was well-loved by his students despite a reputation as a strict disciplinarian. Br. Victoriano’s work with the choir brought him many accolades, but he was far more pleased that the beautiful music brought people to Mass. Br. Victoriano was sent to Turon to teach; 20 days later, the Spanish Civil War began. The school was invaded by revolutionaries, and all the Brothers were shot.

Blessed Natalia Tulasiewicz (1906-1945) was a Polish intellectual who studied musicology, philosophy, psychology, and Polish language and literature. She became a high school teacher and loved her students deeply (though she described grading as “a nail in the coffin”). When the Nazis invaded, Natalia taught secret classes to keep Polish culture alive. Then she sneaked into a group of Polish women being deported to Germany to work in a factory, where she surreptitiously taught religion, Polish, and German, organized a choir, ran a Lenten retreat, and even found priests who could bring the women the Sacraments. Eventually she was caught and sent to Ravensbrück, where she continued to teach the faith until she was killed in the gas chamber.

Blessed Lucien Botovasoa (1908-1947) was a Malagasy convert to Catholicism who taught at a Jesuit high school. He loved his students deeply and often stayed well after the end of the school day to tell them stories of the saints and try to draw them into the heart of Jesus. A husband and father of eight (only five of whom survived infancy), Lucien was a Secular Franciscan; he was martyred because of his leadership in the Christian community.

Blessed Maria Romero Meneses (1902-1977) was from a well-to-do family in Nicaragua and was set to teach music, art, and typing to wealthy girls after she joined the Salesians; instead, she mobilized her students to serve the poor. What started as little more than a class service project became total reform in Costa Rica, as Sr. Maria built schools, clinics, food banks, rec centers, and entire neighborhoods full of affordable housing.

Blessed Benedict Daswa (1946-1990) was a South African teacher, a principal, a soccer coach, a husband, and a father of eight. He was known for fostering integrity and respect among students and teachers alike, and for encouraging students (especially girls) not to leave school before graduation. He was also a leader in his tribe. But none of that protected him when he resisted a collection that was being taken up to hire a witch to perform some black magic. Over a sum of about $2, Benedict was brutally murdered.

Read more:
5 Keys to a good education according to St. John Bosco