When the way of life gets rocky, turn to Mary the Conductor 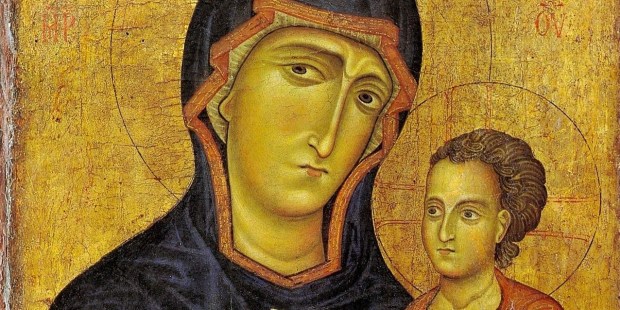 An ancient icon, beloved of St. Ignatius of Loyola, still points the way.

Be with us Mary, along the way,
Guide every step we take,
Lead us to Jesus, your loving Son:
Come with us, Mary, come. (“Hymn to Our Lady of the Way”)

I first ran into her in Assisi, 10 years ago. Not yet returned to the Church, on a pilgrimage with Catholic friends, I noticed an icon in the Chapel of St. Catherine of Alexandria in the Lower Basilica of St. Francis. The pose — Our Lady holding the Christ Child — and the Byzantine art style seemed familiar. But this was not Our Mother of Perpetual Help, as I first thought. A sign informed me it was Maria, Madre di Dio, Condottiera.

Mary, Mother of God, the Conductor? I was intrigued.

An informative text translated Condottiera as “Guide,” and noted that the image was based on an ancient icon of Mary known in the East as the Virgin Hodegetria, the “one who shows the way.” It depicts Mary holding or standing next to the Child Jesus, with one hand pointing to him as the Way.

The journey of an image

According to tradition, the original Hodegetria icon, a full-length image, was one of those portraits attributed to St. Luke. Brought from the Holy Land to Constantinople by an emperor’s wife, it was displayed there in a monastery built to house it.

This venerated image disappeared during the fall of the Byzantine Empire. In the 10th century, portrait versions (which some claimed to be based on a section cut out of the original icon) began surfacing in both Russia and Italy. In Russia, it influenced the composition of the beloved icon of the Virgin of Tenderness.

In Italy, one of the first Hodegetria images to be venerated was the icon known as the Salus Populi Romani (the Help of the Roman People), displayed in the Basilica of Santa Maria Maggiore. As in many Western versions, Mary does not point with her hand, but presents the Child to our gaze. Today this icon is visited and venerated by Pope Francis before and after he travels away from Rome. He asks her prayers to accompany him on the way, and thanks her for his safe return.

Read more:
“With the Virgin, I’m safe”: Pope explains why he starts and ends trips with Mary

St. Ignatius, the Jesuits, and Our Lady of the Way

In Italian, the Virgin Hodegetria is most often known as the Madonna della Strada (Our Lady of the Way). A fresco of this image was painted on the exterior wall of a small medieval chapel dedicated to the Madonna della Strada. The image caught the eye of St. Ignatius, who was in Rome working to establish the Society of Jesus (the Jesuits). He would pray fervently before this portrait, and ask Our Lady to guide the future of his mission.

That tiny chapel of Our Lady of the Way became the first church of Ignatius’ new order, and the Madonna della Strada became the patroness of the Jesuits, who celebrate her feast day on May 24. When the Society of Jesus began to flourish, the tiny chapel was torn down to make way for the construction of the Gesù, the magnificent Baroque home of the Jesuits in Rome.

But the portion of the wall containing the fresco of the Madonna della Strada was preserved, and is displayed in a place of honor in the Gesù to this day.

I still haven’t been able to make the connection between Our Lady the Conductor and St. Francis, so I’m not sure why she is honored at Assisi. I do know that it was on that pilgrimage that I received the grace to find my way back to the Church. I know she conducted me.

These days, more than ever, we all need a guide pointing to the Way, the Truth, and the Life who is Jesus. We need Our Lady of the Way to walk by our side, teaching us, too, to point out the way for other pilgrims on this rough road.

By whatever name we call you, Mary, Mother of God, Conductor, come with us!