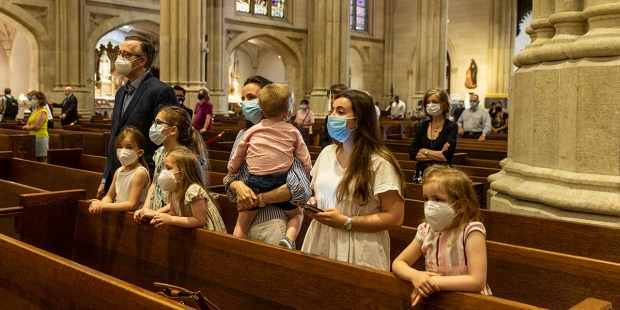 On the feast of the Assumption, August 15, several small groups of people gathered in different parts of the plaza outside San Francisco’s Cathedral of St. Mary. Each group, limited to a dozen people, simultaneously participated in Mass led by a different priest.

It was in this way that San Francisco Archbishop Salvatore Cordileone provided the liturgy for as many people as possible on one of the Church’s most important feast days, while still abiding by the city’s COVID-19 pandemic restrictions. No worship services may be held indoors, the city says, and gatherings must be limited to 12 socially distanced people.

The cathedral itself has a normal seating capacity of at least 2,000, but it cannot be used at this time, even for 12 Catholics. While Archbishop Cordileone patiently awaits his city easing up on its restrictions, to allow the same kind of indoor worship that other states and cities around the country have already permitted, a study by three infectious disease specialists may give his cause a boost. Catholic churches across the country have held approximately a million public Masses (in about 17,000 parishes) for the last 14 or more weeks, following guidelines to prevent the spread of the virus — social distancing, wearing masks and hand washing or sanitizing — and there have been no outbreaks of COVID-19 reported in any of them, the specialists say.

The experts — Thomas W. McGovern, MD, former Clinical Infectious Disease Researcher, US Army Medical Research Institute of Infectious Diseases and a national board member of the Catholic Medical Association; Deacon Timothy Flanigan, MD, Professor of Medicine at the Alpert Medical School of Brown University, and Paul Cieslak, MD, Infectious Disease Specialist and Medical Director of Oregon Public Health Division’s Communicable Disease and Immunization programs — are members of the Physician Members of the Thomistic Institute Working Group on Infectious Disease Protocols for Sacraments & Pastoral Care. They published their findings in an article, “Evidence-Based Guidelines to Celebrate Mass Safely Are Working,” at the Real Clear Science website. They said that no outbreaks of COVID-19 have been linked to attendance at Catholic churches, even though there have been examples of asymptomatic, unknowingly infected individuals attending Mass and other parish functions.

“Their attendance could have led to an outbreak if appropriate precautions were not followed, yet in each case, we found no evidence of viral transmission,” the doctors said.

The study cites several cases of COVID-19-positive individuals who participated in various parish events or sacramental encounters who did not spread the virus to others. The information was supplied to the physicians by an employee of the Archdiocese of Seattle, which has been following a contact-tracing protocol for everyone who comes to church:

“In each of these five examples, all participants (except for the priests at the altar and other liturgical ministers) wore masks, and maintained six feet of distance between non-household groups — except for brief encounters such as reception of Holy Communion or anointing,” the study reported. “In each case, public health officials and attendees were notified of possible exposure, and no individual developed COVID-19 by 14 days after each event.”

The study, published Wednesday, said that after reviewing recent public health and media reports regarding COVID-19 dissemination the doctors found no reports of disease transmission, let alone outbreaks, in a Catholic church following such guidelines.

On the same day, WHYY, the Philadelphia affiliate of National Public Radio, reported that nine members of the CityReach Philly Church tested positive for COVID-19. Pastor Mark Novales told the station that the church has “taken extreme measures to protect the health of those who worship at CityReach,” including social distancing, mandatory masks, and sanitizing, as well as careful cleaning of the church’s furnishings between services.

An investigation, however, led city officials to believe the guidelines were not followed “perfectly,” WHYY said.

“I suspect that means that the guidelines were not followed,” said Dr. Flanigan, one of the Catholic group’s study authors.

There are other recent examples of coronavirus infection outbreaks apparently due to gatherings in churches, but media reports suggest that these houses of worship did not enforce precautionary guidelines. More than a dozen people connected with Church on the Rock in Berea, Kentucky, including the pastor and his wife, for example, tested positive for COVID-19, according to an August 11 report at LEX 18-TV. The church hosted a revival meeting the week of July 27, with about 200 people in attendance. The pastor said he and other church leaders had taken steps to adhere to CDC guidelines, but that some people who attended the revival did not wear masks.

Nevertheless, the Catholic study insisted that following the three W’s — watch your distance, wear your mask, and wash your hands — can protect congregants.

“While nothing during a pandemic is risk-free, these guidelines mean that Catholics (and public officials) may be confident that it’s reasonably safe to come to Church for Mass and the sacraments,” the doctors said. “Indeed, for Catholics, the Mass and above all the Eucharist are central to the Christian life. In a time like this, it is even more important that the faithful be able to come to Church and receive Holy Communion.”

“No evidence has emerged to suggest that distribution of Holy Communion in accordance with TI Guidelines has led to COVID transmission,” the latest study contends.

The physicians said they will continue monitoring the situation and will provide updates at the Thomistic Insititue’s website.