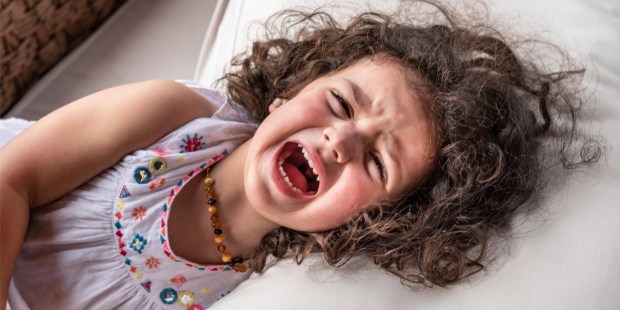 When my second child was born, my first had not yet turned 2 years old: She would blow out two candles on her birthday cake three and a half months later. Everything went well at first—yes, there were a few crises when she was crying at the same time as her brother, some “concerts” I won’t tell you about—but nothing more.

Everything changed a few months later, when she entered the “terrible twos,” and I really felt like I was entering a dead-end tunnel. My daughter started to have tantrums, and not the classic ones demanding to play a game, have ice cream or be held in my arms—the one-off tantrums that are perfectly normal for a little girl. No: this was a 24-hour, perpetual tantrum.

She was never calm. She went on from morning until night with such short breaks that I can’t remember them. She spent the day sobbing and screaming hysterically, and I was worn out. She wouldn’t listen, she wouldn’t obey, and she wouldn’t calm down. (The fact that I’m speak in the past tense should give you hope, dear new parents who are reading this. Yes, I’ll tell you right now, today is much better.)

She cried uninterruptedly, and complained perpetually—she never whispered, but shouted, always loud and desperate. I tried every remedy to calm her: consoling, listening, explaining, yelling, talking …

I soon realized, however, that my trying to give explanations and reasoned answers to the constant requests of my daughter, who was already very talkative and possessed a rich vocabulary, had even become counterproductive. Nothing seemed to work. I was more and more tired, downright exhausted and dazed.

Read more:
Try this one simple trick to radically transform your child’s behavior

Breastfeeding under these conditions, working, fixing the house, preparing lunch, trying to talk to my husband; doing anything with this desperate and insistent wailing in the background was very difficult. “Baby Shark” on repeat is nothing in comparison, I guarantee. And the mothers who’ve been there will agree with me. You are heroines without knowing it. (I knew there was nothing wrong with her medically — but this is something you should check if you see substantial changes in your child that have no other explanation.)

One afternoon, in the middle of her weeping and wailing, I started to pray the Hail Mary. The whining didn’t stop, but I finally began to feel free. I don’t know how to explain it, but by praying to the Blessed Mother, I was able to be present to my daughter while not being a prisoner to her moods or whims. By creating a well of peace within myself, I helped make a shift in what was happening with my daughter.

My daughter has not magically changed, but she listens more to me. She still yells and says “no,” but she’s learning to do as I ask. She answers me, maybe not at the first call, but at the third. She cries and stamps her feet, but after a while she stops, and comes and kisses me, saying, “I’m sorry, Mommy.”

So take a deep breath and don’t let yourself be discouraged; there’s no need to panic.

There is plenty of literature with helpful suggestions from child psychologists, but even if they don’t work as well as you’d like, the terrible twos don’t last forever. Breathe deep and pray a Hail Mary. You will survive.

Read more:
A survival guide for getting through the “terrible twos”