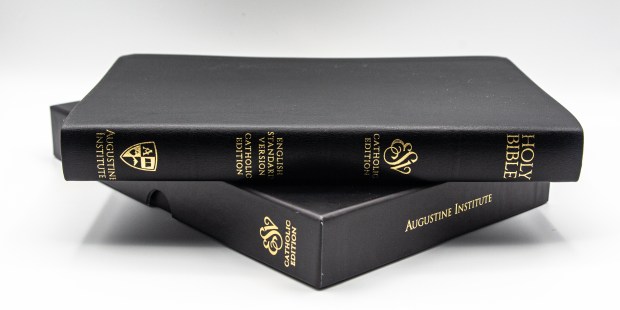 The Augustine Institute is publishing a brand new edition of the Bible, the Catholic Edition of the English Standard Version (ESV-CE). Aleteia spoke with the institute’s Mark Giszczak, associate professor of Sacred Scripture, about the origins and reason for the new translation, and how it remedies problems such as inclusive language in other editions.

The institute is holding a free online Bible conference, Anchored 2020, next Saturday, October 10. More information is available on that and the new Bible edition at the Augustine Institute.

The Augustine Institute’s website said this is the “most readable, accurate, and reliable translation of the entire Holy Bible available for English-speaking Catholics throughout the world.” How is it the most accurate and reliable?

The English Standard Version-Catholic Edition pursues a word-for-word translation philosophy. It calls itself an essentially literal translation. The goal is to be as transparent as possible to the original text, while still producing good, solid elegant English in the translation. It’s not the same as reading an interlinear [which has the original language and English side by side], but it’s not pursuing a more loose translation style, often referred to as thought-for-thought style translation or dynamic equivalent. It’s really trying to stick to a word-for-word approach.

Tell me about the history of this translation: When and why did it begin, and who initiated it?

It begins with the Revised Standard Version (RSV) translation, which was produced in the mid-20th century and became widely used in both Protestant and Catholic circles. It was a translation done by Protestants and subsequently approved by Catholic authorities in the 1960s. But the RSV started to go out of print and was slowly being replaced by the NRSV in the 1990s. When the NRSV was published, a lot of people, both Protestant and Catholic, hoped it would be the replacement for the RSV, but the NRSV took a pretty unusual course, especially on inclusive language and certain other matters, which a lot of folks really weren’t happy with. It produced some strange translations. There were a lot of Protestants and Catholics who hung onto their RSV bibles in the 1990s.

In the Protestant world, there was a kind of debate between the NRSV, the RSV, and the NIV [New International Version], which kind of came to a head in 1997. In 1997, there was a big meeting at Focus on the Family in Colorado Springs about problems related to Bible translation, particularly inclusive language, and they released a statement called the Colorado Springs Guidelines, where the advocates of the NIV and the advocates of the RSV met together. Out of that meeting came the idea for the ESV, and those who liked the RSV wanted to have a new translation that was most up to date in terms of English language, manuscript evidence, and all the latest information available but didn’t make the mistakes the NRSV did.

Thus the ESV project was born, and it was first published in 2001 by Crossway Books. The Catholic edition was approved on February 4, 2018, by the Catholic bishops of India, and subsequently the ESV-Catholic Edition lectionary was approved in December of 2019 by the Vatican.

The Catholic edition project was really led by Cardinal Oswald Gracias [of Bombay], who is on Pope Francis’ Council of Cardinals. He wrote the foreword to the Catholic Edition and granted it the imprimatur.

Give me some examples of how this translation, which was originally a Protestant effort, had to be adapted for Catholic readers.

The changes between the Protestant and Catholic editions are very minor. Some of those are as minor as changing the title of Abigail the Carmelite [a wife of the future King David] to Abigail of Carmel, so there’s no confusion that there’s a Carmelite nun wandering around the Old Testament.

Some of them are more substantial. The most interesting, from my perspective, has to do with the Book of Tobit. The original RSV translation of the Book of Tobit came out in 1957, and it was based on the shorter Greek manuscript, Greek I. Later, evidence from the Dead Sea Scrolls revealed that the longer Greek manuscript, Greek II, is actually better and more accurate. And that’s what you find in the Catholic Edition.

Who worked on the translation, and what role did they play?

The translation oversight committee was composed of about 12 scholars who worked on the translation over a period of years and would take votes on various things. They had other scholars working with them as well, submitting suggestions. But it was really the oversight committee that made the decisions about what the translation would look like. In this way, it’s a small team, which I think is a really helpful thing for producing consistency in the translation. It’s not hundreds and hundreds of people; it’s a small team working together to produce a very consistent product.

How did the Augustine Institute come into the picture?

The ESV Catholic Edition was originally approved and published in India. However, Crossway Books, who owns the copyright for the ESV and is a Protestant publisher, wanted to find a Catholic partner in North America to distribute the Catholic Edition. Since they don’t publish for a Catholic audience, they wanted to find someone who could work with them and be able to publish the Bible in a beautiful way and make it available to Catholics in America and Canada. We were very delighted and lucky and feel blessed to be chosen to have the rights to publish the Catholic Edition in North America and we’re very excited to bring this great new Catholic translation to Catholics in the United States and Canada. I think people will really enjoy it.

There’s something wonderful about the ESV: on the one hand, it feels fresh and new, but on the other hand it feels very familiar because it retains the traditional biblical language of the RSV. So if you’ve read the RSV you’ll feel very comfortable about swimming in the waters of the ESV.

The Vatican document Liturgiam authenticam came into play in all this. What is it, and what role does it play in this translation?

There were a lot of debates about biblical and liturgical translation among the bishops in the 1990s, and they led up to this definitive document, Liturgiam authenticam, which is the Vatican’s official translation principles for liturgy and for scripture. The ESV-Catholic Edition adheres to those principles. That’s really why the Indian bishops wanted to embrace it. They had actually been looking for a new translation for their lectionary for a while. They had been using the RSV and the Jerusalem Bible, and they actually approved another translation relatively recently, the New Living translation. But that’s a paraphrase translation, which isn’t suitable for liturgy.

They were able to find the ESV and produce a Catholic edition of it, and the ESV’s translation principles line up with the principles of Liturgiam authenticam, and they had a team of Catholic scholars review it and make a few additional changes to make it appropriate for a liturgical setting. So you’ve got a really great meeting of the minds between Catholics and Protestants: on accuracy in Bible translation, on transparency, on a kind of literal word for word approach.

So the ESV will be a great translation for use in the lectionary. It’s not only been adopted by the bishops in India, but also by the bishops of Scotland. Liturgiam authenticam had a really big role to play in the Indian bishops’ decision to embrace this translation.

The promotional material for this new publication speaks about inclusive language. Why has this been a problem? Give me an example of how this new edition fixes it.

Inclusive language is a very complicated discussion, because on the one hand you have a desire to be welcoming, inclusive and pastoral and open arms in a translation, so that everyone feels that the Word of God is speaking to them. On the other hand, there’s a real priority for accuracy, that you want the Word of God to come through as clearly and in as accurate a mode as possible. And I really feel that the ESV does a great job of balancing those two priorities.

For example, it fixes the problem we find in the NRSV: when Jesus calls himself the Son of Man, and you go look for that phrase in the Old Testament you can’t find it. Jesus is referring to Danial 7:13: “One like the son of man coming on the clouds.” In the NRSV it says “One like a human being.” So the connection is lost. The ESV is going to restore that connection.

However, in the RSV, you have it inserting male-oriented language where it actually is not there in the original language. For example in Luke 6:45, where the RSV says “a good man,” where the ESV will say “a good person.” Or John 7:4, which says “For no man works in secret” in the RSV, and in the ESV it says “No one works in secret.”

Will we begin to hear this translation at Mass and other liturgical services?

In the United States, the bishops use the New American Bible, and in Canada they use the NRSV. Over time, it’s hard to say what will happen, but English-speaking bishops’ conferences around the world are looking at the ESV as a possibility. We see that in the approval of the bishops in Scotland, and perhaps the bishops of England and Wales will adopt the translation as well. English is the most widely spoken language on planet Earth. There are lots of bishops’ conferences that need an English lectionary, and now that the ESV is an option I think many more of them will be looking at it.