Still missing: The stolen Rembrandt masterpiece, “The Storm on the Sea of Galilee” 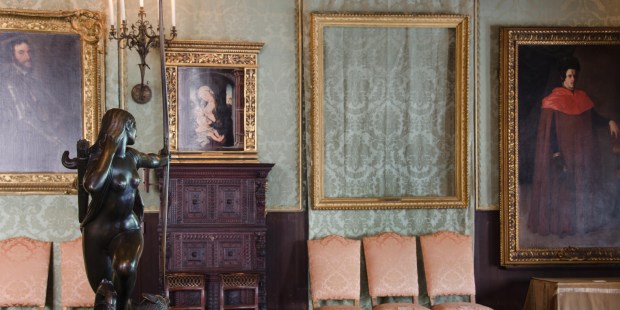 A moving depiction of the biblical passage describing Christ calming a storm on the Sea of Galilee has been missing since a theft 30 years ago.

Rembrandt van Rijn is considered one of the most important figures of the Dutch Golden Age. In his 40-year career he left behind a varied body of work, from biblical subjects to domestic scenes and self-portraits. He painted one of his most famous works, “The Storm on the Sea Of Galilee,” when he was only 29 years old. Here, the Dutch master put on canvas the famous biblical scene that sees Christ calming a violent storm that broke on the Sea of Galilee.

He [Jesus] got into a boat and his disciples followed him.Suddenly a violent storm came up on the sea, so that the boat was being swamped by waves; but he was asleep. They came and woke him, saying, ‘Lord, save us! We are perishing!’He said to them,’Why are you terrified, O you of little faith?’ Then he got up, rebuked the winds and the sea, and there was great calm. The men were amazed and said, ‘What sort of man is this, whom even the winds and the sea obey?’ (Matthew 8:23–27; see also Mark 4:35–41 and Luke 8:22–25).

Rembrandt portrays Jesus surrounded by the 12 disciples and a fourteenth character who, according to art historians, is Rembrandt himself. It was indeed common for artists to place a self-portrait in a biblical scene to practice “lectio divina,” putting oneself in a biblical tale to wonder how one would have behaved.

Rembrandt also uses his majestic chiaroscuro to convey the powerful message of the “Sea of Galilee” story, his only seascape. Light is used to illuminate the figure of Christ and those around him. By contrast, disciples who are far from Christ lie in the dark side of the boat, looking more scared than the illuminated group. This symbolizes the fact that those who have faith in Christ share his light and can be calm even during a brutal storm.

But despite being a great symbolic painting, this canvas has made headlines in recent decades for a different reason. The “Storm on the Sea at Galilee” is, in fact, one of 13 masterpieces that were stolen from the Isabella Stewart Gardner Museum in Boston on March 19, 1990.

The theft, considered one of the greatest unsolved mysteries of the art world, was perpetrated by two men posing as police officers. Museum security staff let the men in thinking they were officers responding to a security threat, but ended up tied up in a room as the men proceeded to steal 13 works of art.

On top of Rembrandt’s Bible-inspired canvas, the thieves snapped up other masterpieces of art history belonging to giants such as Manet, Vermeer and Degas. Adding to the mystery, there has never been any request for ransom.

“I’m still wildly obsessed, more than ever,” said Anthony Amore, the chief of security of the Isabella Stewart Gardner Museum in Boston in a 2019 interview with The Art Newspaper. “I constantly think about those paintings.”

One of the most accepted theories about the theft is that it was orchestrated by local mobsters who then sold off the work on the black market. But to date, no one has yet found any information about any of the 13 works of art.

A few years ago, authorities searched the house of Robert Gentile, a former mobster, and found a list of stolen Gardner works with possible black market prices. But the man always denied any involvement in the crime and stated he had been framed by the widow of another mobster.

Today, despite 30,000 leads, the mystery of the Isabella Stewart Gardner theft remains unsolved.