Walk the Jesus Trail from Nazareth to Capernaum

This four-day pilgrimage begins at Jesus' hometown and ends where he spent three years of his active ministry.

The Jesus Trail is a walking Camino in Israel from Nazareth to Capernaum. Though lesser known than the European Caminos that follow the routes of the apostles, walking in the footsteps of Jesus Christ himself is a powerful experience.

The Trail covers 69 kilometers (43 miles) across Israel’s northern Galilee region in four days. At roughly 15 kilometers (9 miles) per day and devoid of steep mountain climbs, it is feasible for most people in average shape.

The route begins where Jesus was conceived and raised – in Nazareth – at the modern Basilica of the Annunciation, the largest church in the Middle East. Some pilgrims choose to spend an additional night in Nazareth to visit other Christian sites in the Old City including the Church of St. Joseph and Mary’s Well. There is also Nazareth Village, an authentic 1st-century re-creation of Jesus’s hometown.

Day One goes from Nazareth to Cana. After an unattractive departure through Nazareth’s garbage-strewn outskirts (an unfortunate reality in some parts of the region), the Trail passes the archaeological site of Zippori National Park. Also known as Sepphoris, this was the administrative capital of the Galilee in the first century. Though not mentioned in the New Testament, Christ surely came here as it was so prominent and close to Nazareth.

The route then winds through forests and more villages until reaching Cana. Cana is today an Arab town (known locally as Kafr Kanna), and the highlight is the Franciscan wedding church recalling the first miracle Jesus performed when he turned water into wine (see John 2:1–12).

Day 2: The Via Maris

The next day offers little of significance in the way of Christian historical sites. However, other cultural and naturalistic highlights include pleasant forests, a goat farm, unique fauna and flora, and the remains of an ancient Roman road known as the Via Maris.

The many military posts – some abandoned, some still quite active – are abrupt reminders of the historical and current conflicts in the region.

Finally, after negotiating through a major intersection followed by a McDonald’s and a museum commemorating the Golani Brigade, the walk ends at Kibbutz Lavi, known for its production of synagogue furniture and its modern hotel.

The third day is exciting. After leaving the kibbutz and traipsing across dirt roads and footpaths, the route passes up and over the storied Horns of Hattin. Here an important crusader fortress was wiped out by Muslim troops under the command of Saladin in the late 12th century.

After scrambling down the rocky side of the volcanic formation, the route passes the Druze shrine of Nebi Shu’eib, which houses the tomb of Jethro, the father-in-law of Moses.

The Trail then meanders gently among groves of olive trees. The attentive pilgrim may notice an Islamic minaret rising above the treetops to the left of the Trail. This is all that remains of the “Lost Town” of Hittin, which “disappeared” after the War of 1967.

Finally, after a vigorous climb, the day concludes at the spectacular Arbel Cliffs with breathtaking views of the Sea of Galilee.

Day 4: The Sea of Galilee and Capernaum

The last day is the most poignant for the Christian pilgrim. Walking along the Sea of Galilee is an unparalleled experience, as it was the setting for so many stories from the Gospels. The last day also offers cultural, historical, and natural sites, too.

While descending the steep pathway down the Arbel cliffs, hikers can get an up-close look at caves used as hideouts by 1st-century Jewish rebels during the Great Revolt against the Romans. Roman historian Josephus documented how Roman soldiers were lowered down the cliffs in large baskets from which they threw the rebels down to their death. At the valley floor is Wadi Hamam, a modern settlement built by Bedouins in the early 20th century – and a great place to stop for falafel.

Next the Trail passes near the biblical port town of Magdala, home of Mary Magdalene. Some years ago, the Legionaries of Christ purchased land near the shore to build a guesthouse for pilgrims (magdala.org). During construction, they unearthed an important 1st-century synagogue and other parts of the ancient city of Magdala.

Nearby is Kibbutz Ginosar, with a museum conserving a 1st-century Galilean fishing boat similar to those used by Christ and the disciples.

Next is an enjoyable, though long, walk near the northwest shore of the Sea of Galilee (at 210 meters/130 feet below sea level). Birders will be impressed by the exotic birds that thrive here due to the mild climate and abundant fresh water. Likewise, agricultural enthusiasts will marvel at the rich black soil, composed of fertile volcanic basalt rock, and the incredibly varied cultivation of bananas, dates, mangoes, grapes, and olives.

After a full day’s walk, the Jesus Trail finally arrives at the pinnacle of the pilgrimage: three ancient churches followed by Capernaum. Here – for the first time since Nazareth – the pilgrim will have to get used to the throngs of “bus pilgrims” of every nationality.

The first church is Taghba, the site of the miracle of the multiplication of the loaves and fishes and the feeding of the multitude. On the other side of the road, atop a small ridge are ruins believed to be the ancient church built on the site where Christ preached the Sermon on the Mount (a modern church commemorating the event is farther up the hill). Along the seashore is the Church of Peter’s Primacy that commemorates the moment when Jesus named Peter as the first among the Apostles.

Finally, after another 30 minutes of seaside walking along the north shore, the Jesus Trail terminates at the archaeological site of Capernaum. Known as the “town of Jesus,” Christ came here after fleeing Nazareth and lived here with his disciples during his three-year period of active ministry.

St. Jerome (347-420) said, “Five gospels record the life of Jesus; four you will find in books and the one you will find in the Holy Land.” Certainly, due to cultural issues and frequent security and political tensions, visiting Israel requires a level of attentiveness and concern that is perhaps unnecessary on European Caminos. However, walking the Jesus Trail is hands down an incomparable way to “read the fifth gospel.”

(Bret Thoman’s latest book, A Knight and a Lady:  A Journey into the Spirituality of Saints Francis and Clare is available on Amazon in ebook and paperback) 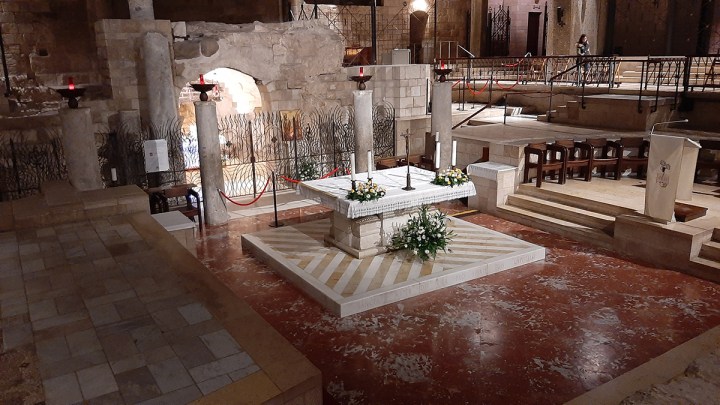