A new painting of Christ by El Greco has been discovered

An art collector brought the painting "Christ bearing the cross on his shoulder" to experts at Centre d'Art d'Època Moderna (CAEM), in Lleida, Spain.

Is it possible that the image of Christ on this previously unknown canvas, “Christ bearing the cross on his shoulder,” came from the brush of one of the greatest artists of all time, Domenikos Theotokopoulos, El Greco (1541-1614)?

This is the question that was posed to researchers at the Centre d’Art d’Època Moderna (CAEM), in Lleida, Spain, an institution of recognized prestige in the authentication and certification of works of art.

The question was asked in December 2018 by the owner of the painting, a collector who asks to remain anonymous. He had bought this small work, measuring 22.6” x 15.15”, years earlier; however, the official documentation did not make clear its authenticity. 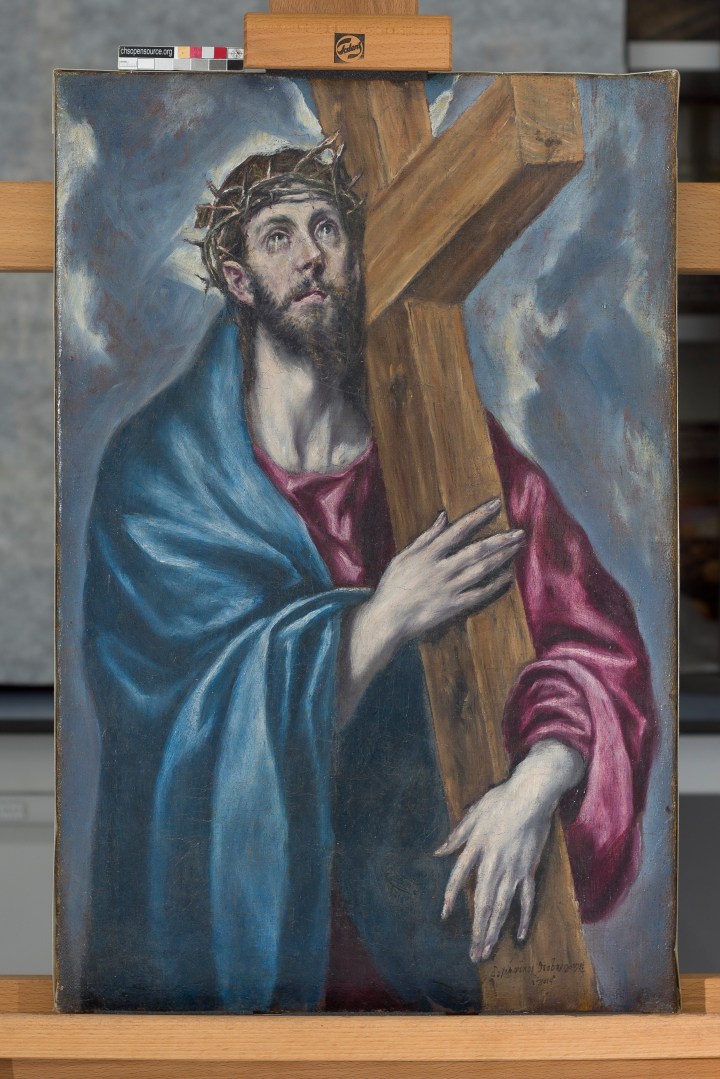 “Studying ‘Christ bearing the cross on his shoulder’ has been exciting,” Ximo Company, professor of Art History and director of CAEM, explains to Aleteia.

The conclusion was exciting: there are many elements that this work shares with known works by El Greco, explains Prof. Company, who specializes in stylistic analysis.

And he adds: “Little by little we analyzed and compared our Christ with other works by El Greco and his workshop. (…) (This type of) iconography was used starting in the ninth decade of the 16th century, in which the artist created a prototype of Christ with the cross on his shoulders that achieved great success.”

A model by El Greco for his clients

“After carrying out a thorough comparative study between the work in question and numerous similar works by the master, we believe that our work could correspond to a delicate and highly appreciated ‘riccordo’ from the famous devotional series of Christ with the Cross on his shoulder.”

The most likely scenario is that “the work studied here was conceived by the master himself as a model work to show to the clientele, and also as a paradigm for El Greco’s disciples and assistants,” concludes Dr. Company, who has been director of the Museum of Fine Arts in Valencia, the second most important art gallery in Spain.

Mariona Navarro, a researcher at the CAEM, also participated in the study. She has carried out accurate attributive analyses of paintings by El Greco, Sassoferrato, Jean Ranc and Joaquim Mir, and others related to Goya and Eugenio Lucas Velázquez.

The third signature on the research certifying the attribution of the work to El Greco is that of Dr. Carmen Garrido, who died last December. She was one of the world’s leading specialists on El Greco, Velázquez and Goya.

The thrill of discovering a work by El Greco

What did it feel like for the researchers when they found that the historical, technical, physical and stylistic characteristics of the work confirmed it to be the work of El Greco himself?

“It’s very exciting, especially after so many months of research. This Christological icon is one of the most successful ones to come out of El Greco’s famous workshop. He repeated it on numerous occasions and it was very popular with his clientele,” explains researcher Mariona Navarro.

In 1967, North American expert Harold E. Wethey catalogued up to eleven originals of this same theme, of which the versions of the Metropolitan Museum of Art, New York, and the Museo del Prado, Madrid, stand out.

Others, such as those in the Museum of Buenos Aires or the Royal Palace of Romania, seem to be of somewhat inferior quality.

“In the inventory of El Greco’s assets, carried out by his son Jorge Manuel Theotocópuli between April 17 and July 7, 1614, mention is made of a painting with the title ‘Christ with the cross on his shoulder – small,'” reveals Mariona Navarro.

“Undoubtedly,” concludes the researcher, “it could refer to our work, since after comparing with other works of the same iconography, we are not aware of any with smaller dimensions than the one studied by the CAEM.”

The first thing that surprises us about this depiction of a theme so dear to El Greco is that it does not present us with the physical sufferings of Christ as he faced the torments of the Passion. Rather, his face conveys abandonment to the Father, and serenity. What did El Greco want to tell us with this interpretation of the Passion?

“The theme of Christ with the cross on his shoulder goes back to early Christian art,” recalls Dr. Ximo, professor of Art History at the University of Lleida. “Until the 12th century, the episode was understood in a fundamentally symbolic sense. The cross is not an instrument of martyrdom, but a symbol of the Redeemer’s triumph over death,” explains the professor of Modern Art History.

In the paintings by El Greco, “it gives us the feeling that the weight of the cross is light, and thus it is perceived in the face of Christ.” He is not crushed by the weight of the wood, as represented for example by Mel Gibson in his film The Passion of the Christ. El Greco’s paintings seem to reflect Christ’s words: “My yoke is easy and my burden is light” (Matthew 11:30).

This interpretation of the work explains the brightness of Jesus’ eyes, bathed in tears. We find ourselves, therefore, witnessing a pain that is not that of the whippings and blows suffered before and during the Way of the Cross; here El Greco presents the true pain of Christ, that of abandonment by the Father.

“It’s very likely that such a scene was trying to promote private devotion among the patrons of the time, hence the presentation of a Christ who is very close to the viewer.”

The background of the work is extremely modern. Here there is no cloud of angels, as in another painting of Christ embracing the Cross by El Greco. “Our artist wants the viewer to focus on Christ advancing triumphantly towards Golgotha, so he cuts his figure against the austere background.”

The face of Christ is intensely striking, silent and expressive. How is it possible that such a powerful work by El Greco has gone unnoticed until now?

“Surprises can—and do—always appear. In Spain there are still many unpublished, sublime works, destined, as they become available to be studied in depth, to enrich the history of art in our country.”