"At a time when distances, tensions and wars are sadly increasing in the world, may the new saints inspire ways of dialogue," said Pope Francis.

“Our Christian lives begin not with doctrine and good works,” explained Pope Francis the canonization Mass celebrated in St. Peter’s Square on May 15, 2022, “but with the amazement born of realizing that we are loved.”

While he had appeared in a wheelchair in recent weeks, Pope Francis managed to stand to preside over the liturgy on Saturday. Ten new saints were proclaimed, among them Charles de Foucauld, Marie Rivier and César de Bus.

More than 45,000 people gathered in St. Peter’s Square for the first canonization Mass since the Covid-19 pandemic, under a blazing sun (the crowd was smaller than expected, given the number of people on the Via della Conciliazione). The Prefect of the Congregation for the Causes of Saints, Cardinal Marcello Semeraro – in office since October 2020 but participating in the rite of canonization for the first time – read the biographies of the ten new saints and thus formalized the request to the Pope to include these ten men and women in the calendar of saints.

Holiness consists of “many small acts of daily love”

Clad in a chasuble of John Paul II and wearing the pectoral cross of Paul VI, Pope Francis, who appeared to be in less pain from his knee than at other recent public events, was able to conduct the normal course of this liturgy, but remained seated to deliver his homily. Inviting Christians to “a conversion in the way we often think of holiness,” the Bishop of Rome acknowledged that by “by over-emphasizing our efforts to do good works, we have created an ideal of holiness excessively based on ourselves, our personal heroics, our capacity for renunciation, our readiness for self-sacrifice to achieve a reward.”

“We have turned holiness into an unattainable goal. We have separated it from everyday life, instead of looking for it and embracing it in our daily routines, in the dust of the streets, in the trials of real life,” Pope Francis warned, inviting us to let ourselves “be transfigured by the power of God’s love.”

“The love that we receive from the Lord is the force that transforms our lives. It opens our hearts and enables us to love,” explained Francis, inviting us to “share the charisms and gifts that God has given us.” In particular, he invited political leaders to live their authority “by working for the common good and renouncing personal gain.”

“To serve the Gospel and our brothers and sisters, to offer our lives without expecting anything in return, any worldly glory: this is a secret and it is our calling,” insisted Pope Francis. The Pope continued, “That was how our fellow travellers canonized today lived their holiness. By embracing with enthusiasm their vocation – as a priest, as consecrated women, as a lay person – they devoted their lives to the Gospel. They discovered an incomparable joy and they became brilliant reflections of the Lord of history.”

“Let us strive to follow it, for each of us is called to holiness, to a form of holiness all our own. Holiness is always ‘original,’ as Blessed Carlo Acutis used to say: it is not a photocopy,” he added, referring to the young Italian beatified in Assisi in 2020. “The Lord has a plan of love for everyone,” he assured. 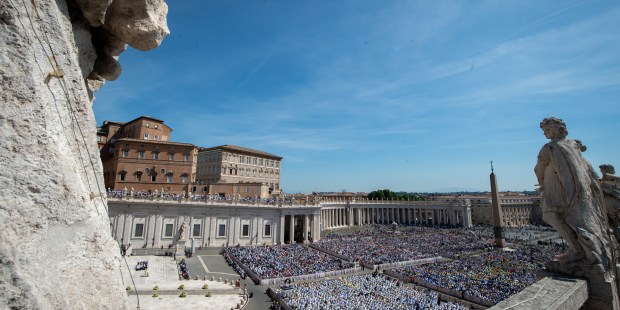 Politicians must be “protagonists of peace and not of war”

At the end of the Mass, before the singing of the Regina Caeli, Pope Francis, standing to the applause of the crowd, thanked the participants, especially the religious men and women “who belong to the spiritual families of the new saints”, and all the representatives of the “faithful people of God” who had come to St. Peter’s from all over the world. He also addressed the political leaders present, mentioning in particular the President of the Italian Republic, Sergio Mattarella.

“It is beautiful to see that with their evangelical witness, these saints have promoted the spiritual and social growth of their respective nations and also of the entire human family,” he said. “At a time when distances, tensions and wars are sadly increasing in the world, may the new saints inspire ways of dialogue, especially in the hearts and minds of those who hold office and great responsibilities, and are called to be protagonists of peace and not of war,” Pope Francis said, without mentioning any particular country.

As he did on Easter Sunday, the pontiff made an effort to walk through the square to greet the cardinals present. He then passed through St. Peter’s Square in a popemobile. This was the 12th canonization Mass of his pontificate celebrated in St. Peter’s Square, and the 15th in total, including the canonizations celebrated during his trips to Sri Lanka, the United States and Portugal.

Read more:Photos and full text from canonization: ‘Since he loved me …’
Read more:Back to saint-making! Sunday’s canonization is a return to normalcy