My Catholic school: at the center of it all was Jesus 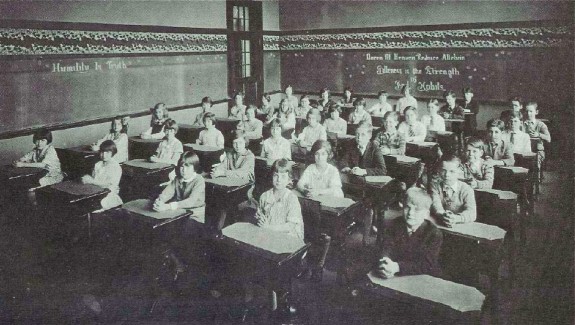 My parish is celebrating its centenary this year.  As part of the festivities, this weekend we had a special Mass at 1 p.m. honoring the school and its alumni.  Two of those alumni, Msgr. John McGuirl and Msgr. Ned Ryan, concelebrated.  Below is the homily I delivered for that event.  It’s a little rough; I didn’t know I would be doing it until Saturday night, and it was composed with a lot of coffee and very little sleep. (I was up early to preach at the 8:30 Mass Sunday morning, too…). But with Catholic Schools Week beginning, it seems timely.

A lot of people don’t know this, but when I was in formation, studying to become a deacon, Msgr. Ned Ryan was my spiritual director.   I used to meet with him every six or eight weeks to talk about the state of my soul.  Inevitably, of course, that became boring. Our conversations would often conclude with him sharing his nostalgic memories of growing up in Forest Hills and attending Our Lady Queen of Martyrs School in the 1950s.

It was a time we remember as the “brick and mortar” era of the American church, when schools were being built and parishes being planned.  Parishes were teeming with nuns and priests.  Every child knew the Baltimore Catechism, and at least some Latin, and no girl would dare to darken the door of a church without a chapel veil attached to her hair with a bobby pin.

In the middle of that, there were hundreds and hundreds of schools like Our Lady Queen of Martyrs, spread out across the country.  The parochial school system was legendary.  It’s not an exaggeration to say that it helped make America what it is.  It certainly had an impact here in Queens.  Our school produced not only the two monsignors sitting here this afternoon, but also Ray Romano, David Caruso, and Captain Kangaroo.  Our Lady Queen of Martyrs School singlehandedly helped program CBS Television.

These days, people will tell you that what makes Catholic education so great is the quality of the teachers, or the discipline, or the values that it has instilled in generations of young people.  And that is true.  But there is something about our school that goes beyond that.

It’s the story of how it began.

Back in the 1920s, when they were planning this church, the founding families made a choice that forever shaped the character of this community, and this parish.

That was what mattered, above all — that the children of Forest Hills would have a Catholic school, a Catholic education.  This magnificent church, the rectory, the convent – all that would come later.  But the school just couldn’t wait.    It was a priority.

So they broke ground in January of 1928 – 84 years ago this month — and opened the school nine months later with the Sisters of the Immaculate Heart of Mary from Scranton.  And for the next 10 years what is now McLaughlin Hall was the parish church.  That was where people gathered for Mass.  For weddings.  For baptisms.  For funerals. For First Communion.  For confession.  It all happened there.

What that means is that the school building was more than classrooms.  It was a house of prayer – God’s house.   It was the dwelling place for the Blessed Sacrament.  When you go into McLaughlin Hall today, you are entering a consecrated space, where the miracle of the Eucharist was celebrated thousands of times.  That is where the spiritual life of this community took root and flourished.   It’s hard not to think of that and be awed, and humbled, and grateful.  The sacrifices people made in those four walls 80 years ago made possible everything we have today.

And: at the center of it all was Jesus. That school was his tabernacle, his temple, his sanctuary, his chapel, his cathedral.  It was his first home here.  Even now the school continues to be a place where the love of Christ lives on, and – importantly — where it is taught.

By coincidence, teaching comes up twice in this Sunday’s gospel – describing how Jesus “taught with authority” in the synagogue.   We can only imagine what it must have been like to sit before Jesus and hear him teach with such power and conviction (though, perhaps Msgr. Ryan and Msgr. McGuirl experienced something like that with the IHM nuns in our school back in the 1950′s.  I don’t know.)  But I do know that what began in that synagogue in Capernaum 2,000 years ago continues, in some way, in Forest Hills today.  The teaching tradition of the church – proclaiming the Good News – is still unfolding in this church and, especially, in our school.  The great story of our salvation continues to be told.  And the values of our faith continue to be passed on.

This school and church grew during some hard times.  We’re facing hard times again in our country, and in our church.  A lot of people will tell you the Catholic school system that Msgr. Ryan and Msgr. McGuirl knew – and the one so many of us grew up in – is gone.  Schools are closing in places like Philadelphia and Boston and New York and Brooklyn – people are saying it’s too expensive to support, or too hard, or the demographics have changed.  They’ll give you all sorts of explanations.

But Our Lady Queen of Martyrs School stands proudly, quietly, prayerfully in defiance of all that.  As we celebrate our school, and remember all that has happened since its founding, my prayer is that we will never forget where we came from, and how it all began — with a commitment to education, with faith in the future, with a belief in possibility.

And with Jesus at the center of it all. 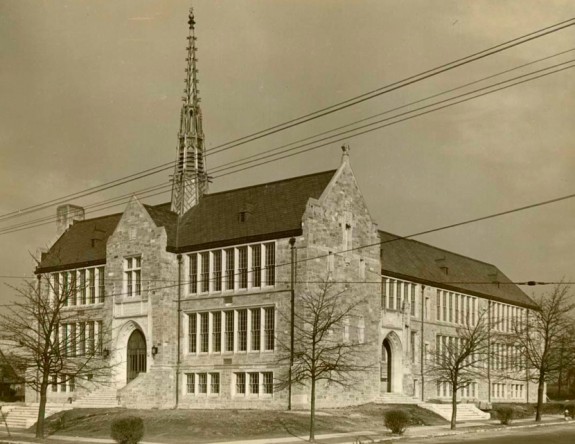