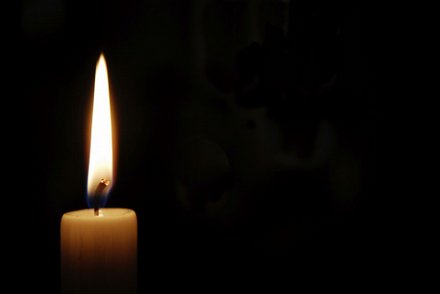 [Yesterday, I was invited to preach at an interfaith memorial service at C.W. Post University on Long Island.  There were prayers from three faith traditions — Jewish, Christian and Muslim. Below is a portion of my remarks for the occasion. — Dcn. G.]

Late on September the 12th, the subways and trains were running again, and the tunnels were reopened, and I was finally able to leave Manhattan.  Around 7 pm, I headed home to Queens.  I was walking up 57th Street toward the Columbus Circle subway station, past brownstones and apartments, when something unexpected caught my eye, something small and bright in a basement window.  It took me a second to realize what it was.

It was a candle.  One small flame, placed in the window of basement apartment.  As I walked on, I saw another, and then another, and then more of them.  They were in windows, on stoops, in row houses and apartment buildings and storefronts, inside and outside.

They were signs of devotion, and remembrance, and illumination – silent reminders that these citizens of a city attacked would not let the world go dark.

New Yorkers wanted to reassure one another and the world: there is light.  It is here.  And it won’t go out.

It’s something we have commemorated with the lighting of candles here, at the beginning of this service.

It is this: they remind us of how the world began.

In Genesis, light was God’s first creation, the one thing He needed before He could do anything else.  Like any craftsman, He needed to see what He had to work with.  And so, Scripture tells us these were His first words to a universe waiting to be created:

“Let there be light.”

And so it was, and so it is.  It has been with us from the first day until this day, across human history.

So, yes: lighting a candle reminds us of how the world began — and that simple act assures us that we can make it begin again.

Rabbi David Wolpe recently wrote about an ancient Jewish story about creation.  It says that the first time that Adam saw the sun go down, he was terrified.  He had never experienced the night.  But God loved Adam, and took pity on him, and gave him two stones to rub together so he could make fire.  The names of the stones were darkness and death.  As the spark emerged, Adam prayed, “Blessed be the Creator of Light.”  Out of darkness and death, the first human realized that God had given him an immeasurable gift – the gift of light, and the gift to be able to create light.

And that, I think, is not only our great gift, but also our great challenge: to be able strike a spark, and banish the darkness.

To BE light for one another, and for the world.

In the darkness of terror and fear…of grief and despair…of prejudice and hatred….

We can be light.