Back when dinosaurs roamed the earth, almost 40 years ago, The Diamondback was one of the best student newspapers in America: a daily paper with a circulation of about 40,000 that consistently turned out award-winning journalism from some of the best and brightest young writers around. To write for The Diamondback (or DBK, as we knew it then) was a privilege, and the next best thing to working for a professional daily. It was a training ground for journalism students who would go on to work for The Washington Post, The Baltimore Sun…and (cough) CBS News.

People who worked there in the ’70s included Norman Chad, who now toils at ESPN; and Mark Kram, Jr.; and the late, great David Mills. Debra DeMaio covered sports at the DBK years before she produced for Oprah. For a short time, I worked as the Arts & Leisure editor;  a skinny guy with long hair and the beginnings of a beard showed up at my desk one afternoon, volunteering to write rock and roll reviews. He was sensationally good, and eventually became the editor of the paper. He went on to write for The Baltimore Sun, and then published a little book called “Homicide,” which became a TV show, which led to something called “The Wire.”  But I knew David Simon way back when.

Most of the time, I wrote movie and theater reviews and features for the paper, and spent far too many late nights redesigning layouts and editing headlines under the hard yellow lights of the paper’s production offices on the top floor of the campus dining hall. We had old wire machines that clattered, and we wrote on manual typewriters that had faded, threadbare ribbon, and the place smelled of cigarettes and spilled beer and burned wax (which was used to glue the stories to display boards before sending them out to the printer.) It was tactile and sensual; we worked with razor blades and ink and glue and paper, back in the days when newspapering was still a time-consuming craft, created predominantly by hand.

It was awful and heady and thrilling and headache-inducing. We subsisted on fattening dining hall food, terrible coffee, and Ledo’s pizza.

So it was with sadness and more than a little melancholy that I read this newstoday:

In late April, the Diamondback staff publicly declared that the 105-year-old paper would be shifting to printing just one time per week starting in the fall semester. 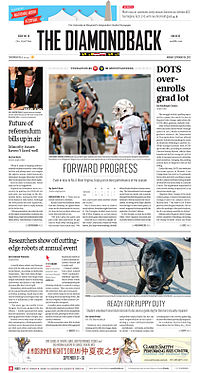 “It wasn’t necessarily a financial decision so much as a conscious choice to keep The Diamondback on the cutting edge and ensure it stays relevant to our readers,” Laura Blasey, the paper’s former Editor-in-Chief wrote in an email. That decision follows the lead of other student papers, including the Montana Kaimin at the University of Montana and the Red & Black at the University of Georgia, which have switched to weekly print editions. The Diamondback dropped its Friday print edition in 2013, and Blasey says that the desire to improve digital content and remain innovative drove the student staff members to move to a weekly print product. “We’re supposed to be preparing students to work in the journalism industry, and it didn’t make sense to continue teaching skills that won’t be around when some of our staff graduate college,” Blasey says. “We also wanted to foster a drive for innovation and experimentation, which we got a taste of when we went online only for our Friday edition in 2013, and that’s really hard to do when you’re spending all your time trying to make the print deadline.” Steven Overly, a University of Maryland alumnus and former Editor-in-Chief of the Diamondback, agrees that moving in a digital direction allows student journalists the opportunity to enhance the delivery of their content. “Producing a physical newspaper comes with significant financial and time burdens,” Overly says. “Once that’s been removed or reduced, those students can focus on delivering news via the Web and mobile devices. That’s where college students are reading news anyway, and it’s where the industry as a whole has shifted.”

The industry has shifted, and I guess there is no going back. What a time it was.