“Do not be afraid”: a Christmas homily 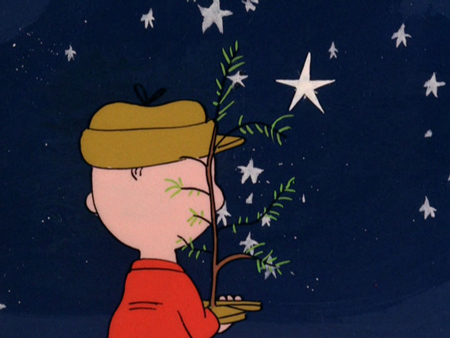 From Midnight Mass, 2007, here’s my first Christmas homily.  While the references are dated, I hope the message still resonates.  For so many this year, the central theme —Do not be afraid—is more urgent now than ever. – Dcn. G.

Like a lot of people of a certain age, I remember well the first time I heard this gospel proclaimed – and it wasn’t in church.

It was in my parent’s den, in Rockville, Maryland, watching an 18-inch Philco black and white TV. The person proclaiming the gospel wasn’t a priest or deacon or minister. It was a little boy with a blanket. It was “A Charlie Brown Christmas.”A few weeks ago, there was a documentary on PBS about Charles Schulz, the creator of “Peanuts,” and he talked about how that show came about, and the battles he had to fight with CBS. The executives were nervous about not having a laugh track…nervous about using real children for the voices…and they were REALLY nervous about having that piece of scripture included. God forbid that you should have a Christmas special that actually mentions Christ! But Schulz stuck to his guns. The result is one of television’s most beloved and most popular Christmas specials.

And it lives on, even in the age of the DVD. A couple weeks ago, when it was shown once again, it was one of the highest-rated programs on television for that week. About 20 million people watched.

It’s a humbling reminder to those of us who climb into the pulpit every week: sometimes the most powerful pulpit isn’t a pulpit at all. And often the most effective preacher isn’t actually a preacher.

Reading this beautiful gospel once again, I found myself marveling at its power. What is it about Luke’s telling of the nativity that makes it so enduring, and endearing? Year after year, century after century, whether on television or in church, we’re drawn to this story, and moved by it again and again. It is, for so many of us, “THE” Christmas story.

Part of it is the cast of characters Luke assembles. Luke was the only evangelist who was not Jewish, and his gospel is beautifully inclusive. He is the evangelist for the outsider and the outcast – and so in this birth narrative you have EVERYONE. Jesus, Mary, Joseph, shepherds, angels, even Caesar is mentioned. The only ones who don’t appear are the wise men, but they’ll pop up on their own holiday, Epiphany, coming in January. In this narrative, you really do see the world spread before us. Everyone is welcome at the stable.

But beyond the setting, and the sentiment, there is a truth here that strikes at the heart of every believing Christian – that truth that defines Christmas.

It is there, in the middle of the gospel, in the very first words that are spoken.

And then it gets even better.

“Behold, I proclaim to you good news of great joy that will be for all the people.”

“A savior has been born for you who is Christ and Lord.”

These are the words we have been longing for. With this moment, the course of human history changes forever. God has become one of us. The savior’s very name proclaims the incredible truth that no one ever thought possible: “Emmanuel.” God is with us. It is a stunning thought, almost overwhelming.

And yet we are told: “Do not be afraid.”

Across two thousand years, those words reach out to us in joy and hope and consolation. No matter who you are, no matter where you live, no matter what your circumstances, this what matters:

To the students at Virginia Tech, to the soldiers in Fallujah and Kabul. To those who lost someone they love in the tragedies of Omaha, or Minneapolis. To the father without a job, or the children pulled apart by divorce or separation:

To the sick and the suffering, the lonely and the lost … to all those who feel that maybe God has forgotten you. To those who feel, as Mother Teresa did, abandoned to the dark night:

Because even in this darkest of nights, there is light. A savior has been born for you who is Christ and Lord. Here is our hope.

He didn’t come in grandeur or majesty, to intimidate us. He came as the most helpless and dependent creature of all: a baby, in a manger, in Bethlehem. He loves us so much, God came to us as someone we could not help but love.

So, do not be afraid!

A couple weeks ago I told the story of a Muslim woman in Iraq who – despite the great danger to her life — is converting to Christianity. She’ll be baptized a Catholic next Easter. That Muslim woman is living this gospel message. She is not afraid. And she bears witness to this astonishing fact: the Incarnation continues. Christ is still coming to us.

If God makes that possible, imagine what other miracles He has in store.

Yes: on this night, I proclaim to you good news of great joy that will be for all the people.

A savior has been born.

And he continues to be born in our hearts, if only we will allow it to happen.

That, I think, is the great power of Christmas, the reason why year after year that beautiful passage from Luke resonates. Christmas is about redemption, yes. But it is also about God’s overpowering love for us – His reassurance to a troubled, frightened, war-torn world that He is with us, through everything.

He dreams with us.

He struggles with us.

He grieves with us.

And: He hopes with us.

Remember his name. Emmanuel. God is with us.

So do not be afraid.

In the immortal words of that great philosopher, Linus Van Pelt: “That’s what Christmas is all about, Charlie Brown.”