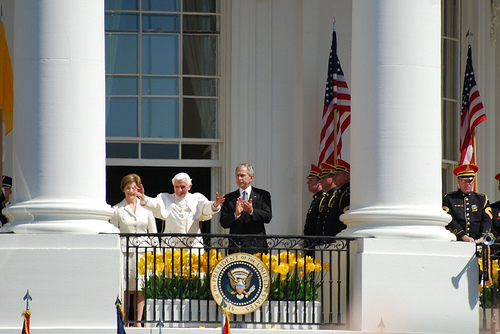 Some observers have expressed disappointment that Pope Francis did not mention abortion during his welcoming ceremony at the White House this morning.

You can read the full text here.

But for a little history and context, it’s interesting to read what Benedict said at the White House welcome in 2008.

And what John Paul said at a similar event in 1979.

In both speeches, the subject wasn’t mentioned.

However, John Paul did bring it up, prominently, when he departed Denver afterWorld Youth Day in 1993.(Though that wasn’t, obviously, at the White House, and President Clinton wasn’t present.)

Significantly, the Holy Father reminded his listeners that “a culture of life” goes beyond the issue of abortion:

For believers, commitment to the spiritual and moral renewal which society needs is a gift of the Spirit of the Lord who fills the whole earth, for it is the Spirit who offers man the light and the strength to measure up to his supreme destiny (Cf. Gaudium et Spes, 10). This has been particularly evident in the prayer – filled attitude of the young people gathered here. As a result, they go away more committed to the victory of the culture of life over the culture of death. The culture of life means respect for nature and protection of God’s work of creation. In a special way it means respect for human life from the first moment of conception until its natural end. A genuine culture of life is all the more essential when – as I have written in the social Encyclical “Centesimus annus” – “human ingenuity seems to be directed more towards limiting, suppressing or destroying the sources of life – including recourse to abortion, which unfortunately is so widespread in the world – than towards defending and opening up the possibilities of life” (John Paul II Centesimus Annus, 39).

A culture of life means service to the underprivileged, the poor and the oppressed, because justice and freedom are inseparable and exist only if they exist for everyone. The culture of life means thanking God every day for his gift of life, for our worth and dignity as human beings, and for the friendship and fellowship he offers us as we make our pilgrim way towards our eternal destiny.