They’ll be ordained this weekend in Arlington, Virginia, and Bishop Paul Loverde has penned a fine tribute to the men and their formation:

Many times during their five-year formation program, I have been moved by the loving support given to the men by their families, particularly by their wives. All the ordinandi this year are married. I visited these men and their wives during one of their classes, and have been kept informed of their progress. I have carefully weighed the evaluations of each candidate and interviewed each one individually this past December in advance of their January 15 ordination. 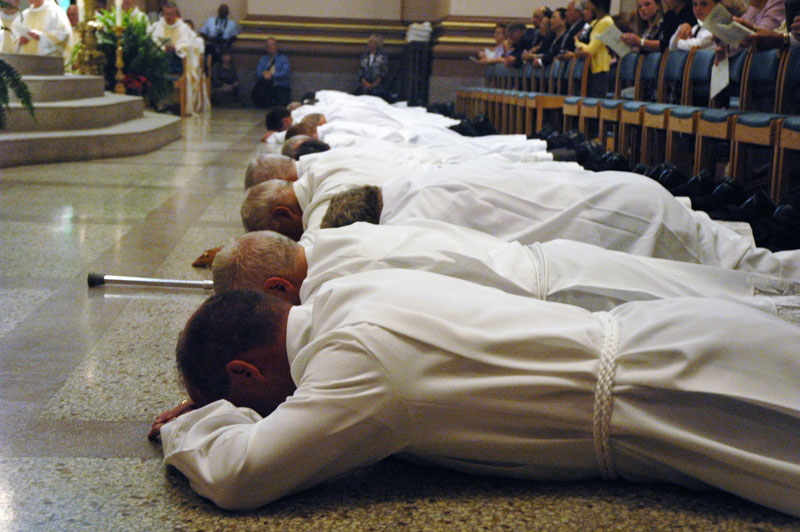 These men fulfill a unique role in our Church by mirroring the image of Jesus as the Divine Servant, Who came not to be served but to serve others. Most of the candidates work in a secular profession and are called to be a witness to Christ in their place of employment and in their neighborhoods. While we all share the call to holiness by virtue of our Baptism, these men are now called to be holy in a different modality by virtue of their receiving the Sacrament of Holy Orders. They are truly ordained. As I wrote in an October 2005 letter, the Diocese of Arlington began its first Permanent Diaconate Program in 1975. In 1985, a moratorium was declared by Bishop John R. Keating. Years later, a need for deacons was demonstrated and clearly present; thus, I reinstated the program in 2006 and formation began shortly thereafter. This year we shall witness the fruits of this formation and preparation at the January ordination. The diaconate is an institution crucial to the mission of the Church and one which should be promoted. When prayerfully considering whether to re-establish the program in the Diocese of Arlington, I was struck by what Paul VI in 1967 wrote inSacrum Diaconatus Ordinem, General Norms for Restoring the Permanent Diaconate in the Latin Church on the importance of reviving the diaconate: “Beginning already in the early days of the Apostles, the Catholic Church has held in great veneration the sacred order of the diaconate, as the Apostle of the Gentiles himself bears witness. He expressly sends his greeting to the deacons together with the bishops and instructs Timothy [1] which virtues and qualities are to be sought in them in order that they may be regarded as worthy of their ministry. …  It is not to be considered as a mere step towards the priesthood, but it is so adorned with its own indelible character and its own special grace so that those who are called to it ‘can permanently serve the mysteries of Christ and the Church.’”

Check out the rest.  My prayers are with you, brothers.  I look forward to seeing the ordination pictures!

UPDATE: But wait!  Turns out,  Virginia has even more deacons coming into the ministry this weekend.