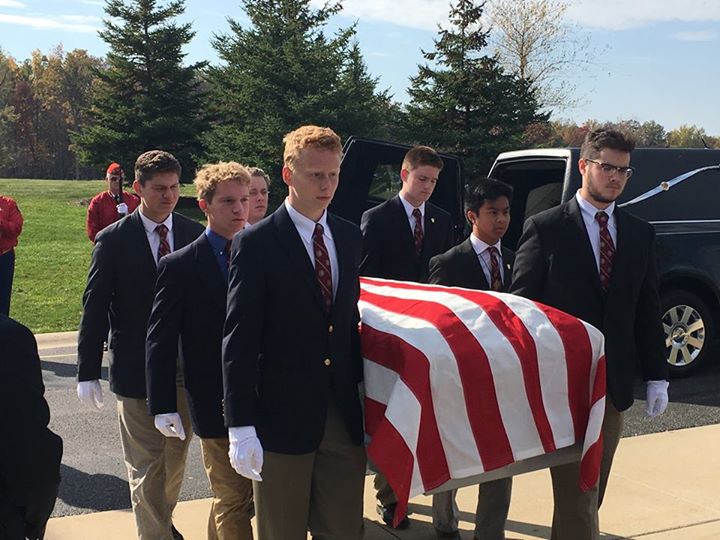 Some may remember the story I posted last year about Jim Skerl, the teacher at Cleveland’s St. Ignatius High School. In 2002, he established a group called the St. Joseph of Arimathea Pallbearer Society, made up of young men who volunteer to serve as pallbearers at the funerals of people who had no one to bury them.

I preached about his inspiring life—and brave death—last year on All Souls Day. I mentioned that, over 14 years, the pallbearer society had accompanied more than 1,200 souls on their final journey. At Jim Skerl’s funeral, some 300 students—past and present members of the St. Joseph of Arimathea Pallbearer Society—lined the walls of the church.

Well, his legacy lives on:

As part of a unique volunteer program, teens at a Detroit area high school are paying their respects to local veterans by serving as pallbearers for those who might not otherwise receive a proper funeral.

If the family of a military veteran cannot be located for 90 days after their death, the Dignity Memorial Network’s Homeless Veterans Program provides them with a casket, according to funeral home director John Desmond. However, there are usually no pallbearers to carry them — until now.

The all-boys University of Detroit Jesuit School pairs with local funeral homes like Desmond’s to coordinate efforts for these fallen military members. The first funerals involving the teens were held earlier this month after more than 50 students participated in a training program, led by faculty member Todd Wilson. “[The students] believe that, through being a pallbearer at the funerals of veterans, the homeless, the socially poor and others, they are … offering a final tribute to a person’s life journey,” Wilson tells TODAY.​

The ministry was conceived by students in the school’s Ignatian Service Corps, or service team, as a way to better serve the community. It is similar to a program at another Jesuit high school, St. Ignatius, in Cleveland.

“I think for the young men here at U of D, it teaches them the value and dignity of life at all levels,” said Todd Wilson.

What a great gift to leave the world.