It feels good to sit down, doesn’t it?

When I was a kid, I was impatient.  I used to dread going to church on Palm Sunday.  There was a long mass and all the standing for the gospel, and I couldn’t wait to sit down.

It was probably the only Sunday I looked forward to the homily.

But lately, I’ve come to think of Palm Sunday differently.

After what we’ve heard and said and experienced over the last 15 minutes, sitting isn’t really the right response.

The fact is, we should be using another part of our anatomy.

We should be on our knees. 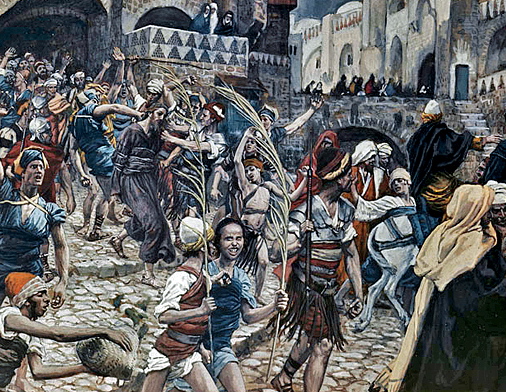 This liturgy makes us remember something we like to forget: we helped bring about the death of Christ.  With the words we’ve spoken here, we have reaffirmed our role – as sinners — in one of the most violent, brutal, unjust and notorious murders in all of recorded human history.

We should be on our knees.

And it is not just because of our complicity in the crucifixion.

This gospel is a perfect companion piece — a bookend, really — to the gospel from the first Sunday of Lent.  If you remember, we began this holy season in the desert, with Satan tempting Jesus.  He challenged Jesus to throw himself from the top of the temple, because his angels would protect him.

But this Sunday, Jesus isn’t in a desert, alone.  He’s in a garden, surrounded by people.  And this time it is Jesus himself – recalling that moment in the desert — who declares that “legions of angels” could save him, if he wanted.

Again and again, he could have spared himself.

Christ had the chance to avoid his passion and death, to make it stop, to escape.

But he did it anyway.

He was betrayed, arrested, denied, and abandoned.   He was beaten.  He was stripped. Abused.  Spit upon.  Whipped.  Ridiculed.  His skin was ripped from his body and his scalp was pierced with thorns and his hands and feet were stabbed with nails.

He could have said no.

If you want to know how much God loves us, there is your answer.

Not only did He become one of us.  He became one of us and then experienced the worst of the human condition.   Pain.  Humiliation.  Scorn.  Helplessness.  Loneliness. Death.

And He did all that for us.

Yes: we should be on our knees.

Over the next several days, in between shopping for the ham and decorating the eggs … remember what happened.  Remember what you heard here at this mass – the great story of Christ’s suffering and death.  Remember how we were the ones who cried out: “Let him be crucified!” And remember that he could have stopped it – but didn’t.

Blessed Charles de Foucauld once wrote: “Christ didn’t save the world with miracles, or with preaching.  He saved the world by dying on the cross.”

That is what this Holy Week is all about.

And it should bring every one us to our knees.

Image: Jesus Led from Caiaphas to Pilate by James Tissot