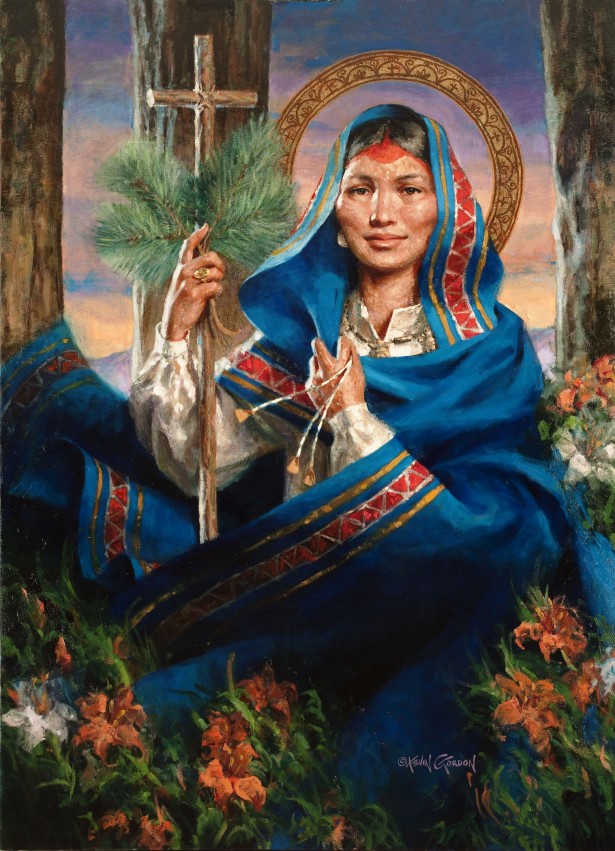 As most of you know, today the Holy Father formally declared a number of new saints, including two from New York, Mother Marianne Cope and Kateri Tekakwitha. I think it is a special and unexpected grace that Kateri was declared a saint during our parish centennial.  She is literally a part of this church.

If you look at the reredos, the wall behind our altar, you see the large painted panels. There’s Jesus in the center of course, surrounded by four saints: St. Dominic and St. Francis of Assisi on the top, and St. Patrick and St. Boniface on the bottom.  Framing all the saints, surrounding them, are carved statues of other holy men and women.  The four wooden statues around St. Boniface are all associated with New York State.  There is Isaac Jogues, one of the Jesuit martyrs, whose feast we celebrated last week;  Mother Cabrini, who ministered to immigrants; Elizabeth Ann Seton, who worked in education.  And then there’s Kateri.

As a piece of history, that reredos is a vital reminder of what the founders of Our Lady Queen of Martyrs considered important about our past—and their vision for the future. This church, you’ll remember, was dedicated in 1939. But Kateri wouldn’t be declared venerable, the first step toward sainthood, until four years later.  It would be another four decades before she would be beatified, and then another three decadesafter that before she would be declared – today — a saint.

Yet the men and women who built this church saw to it that she was there, included among the holiest men and women of our faith. In the 1930s, to include an uncanonized layperson, and a Native American, in the sacred art of a Catholic Church was highly unusual.  But the parish founders had faith that this day was coming—that one day, maybe long after they were gone, people like us would be here to give honor and glory to God, and to celebrate the canonization of St. Kateri.  In a sense, she was their gift to us.

But Kateri was also a gift to all the Church.

St. Kateri was born to the Algonquin-Mohawk tribe in upstate New York in 1656. When she was a child, she suffered from smallpox, which left her partially blind, with scars all over her face. She often went out in public with a blanket to hide her scars.  But her encounters with Christians, and the stories she heard of the gospel, moved her.  And so, at the age of 20, on Easter Sunday, she was baptized.

Kateri’s devotion was total.  Every morning, even in the coldest days of winter, she stood before the chapel door until it opened and remained inside the church until after the last Mass. She had a great love of the Eucharist and the crucified Christ. She helped catechize the young, and care for the old.  You’ll see her depicted holding a small cross made of twigs. She often would fashion these crosses herself and place them throughout the woods. But she suffered for her devotion.  She was shunned by other members of her tribe, who accused her of witchcraft and promiscuity and incest. Because of the smallpox, her health was always frail, and she died young, at the age of 24. Her final words were: “Jesus, I love you.”  Moments after her death, it is said, her face became luminous and the scars vanished.

And now today, four centuries after her death, she has become the first Native American saint.

In many ways, her life is a perfect companion to today’s gospel.  James and John came to Jesus seeking their own glory.  And Jesus turned the tables on them.  “Whoever wishes to be great among you will be your servant,” he said.  “Whoever wishes to be first among you will be the slave of all.”  Greatness, Christ tells us, lies in humility, in servitude, in simplicity. Its ambition is fulfilled in small acts of sacrifice for others. A familiar example is St. Therese of Lisieux, the Little Flower.

But so is St. Kateri, the Lily of the Mohawks.

Kateri is the saint for all who are outside, standing at the door, waiting to be let in.

She is the saint of holy patience.

It took over 400 years for her to be officially recognized as a saint.  And it was 73 years from the day this church was dedicated to the moment today when she was canonized.

For 73 years, that small wooden figure behind the altar served as a silent reminder of her sanctity – and a tribute to the generous foresight of the people who came before us and wanted to include her in this church.

We live the legacy of those who came before us – the saints like Kateri, and the faithful like those who built this parish.  Next week, we will mark All Saints Day. This time of year is a good time to remember all of them—the saints and the would-be saints, those we can name and those we can’t—and to ask them to intercede for us as we continue what they began.

The journey of the pilgrim church isn’t always easy.  But we are not alone.

We are part of a beautiful chain of faith: a bond of believers, joined to the communion of saints, who are with us now and forever.

St. Kateri Tekakwitha, pray for us.

The image above was commissioned by the National Museum of Catholic Art and will be featured at the canonization celebration at the Shrine of Our Lady of Martyrs in Auriesville, NY. Read more.