Here at Our Lady Queen of Martyrs, it’s customary to remember and honor the martyrs of different cultures. This weekend, we’ll have a special mass commemorating a Filipino martyr, Lorenzo Ruiz.  We also have special masses for the Korean Martyrs and the Chinese martyrs.

Last week, I learned something remarkable about one of the martyrs whose feast we celebrated this summer: St. Mark Ji Tianxiang.  He was a Chinese layman who was executed in 1900, along with dozens of other Catholics in his village during a bloody persecution of Christians.  St. Mark was steadfast in his faith, and refused to renounce it – and for that, he gave his life.

That is extraordinary enough.  But so are the circumstances under which he died.

St. Mark, you see, was an addict.  An opium addict.  In the 19th century, the Church didn’t understand addiction as it does now – and his life was seen as gravely sinful and scandalous.  As a result, for 30 years Mark Ji Tianxiang was denied communion.  Yet his devotion never wavered.  Witnesses say that he sang a litany to the Blessed Mother as he was led to his death.

It is tempting for us to think of saints as superhuman – and certainly, many of them, like St. Mark Ji Tianxiang, show phenomenal courage and commitment to the faith.  But his story also reminds us: whether or not a saint is superhuman, he or she is also human.

Jesus understood that, and it’s one of the points in this Sunday’s gospel.  He told the story of two sons – one obedient, one disobedient – and made clear that sometimes the person who appears to be the holiest, or who seems to say the right thing, isn’t necessarily the one doing God’s will.

“Tax collectors and prostitutes,” he said to the chief priests, “are entering the kingdom of God before you.”

This was a shocking thought at the time – but one that should be familiar to all of us today.  The story of our church, after all, is a story of transformation, of change.

It is a story of salvation and redemption – of changing course, and beginning again.

It’s the story of people starting over.

It’s been said that the Church isn’t a museum for stained glass saints – but a hospital for sinners.

Well, we are all patients in that particular hospital.  Some of us are in intensive care.  But a lot of remarkable people have been here before us.

There was Peter the liar, and Thomas the doubter, and Paul the persecutor and the thief called Dismas, who was saved in the final moments of his life by Jesus on the cross.  There was Mary of Egypt, a prostitute.  There was Augustine the pagan, who had a mistress and a child.  There was Dorothy Day, who had an abortion, and Matt Talbot, who was an alcoholic.

There was St. Mark Ji Tianxiang, addicted to opium.

And there’s you and me.  No matter how we’ve sinned, or what choices we’ve made, God holds out this beautiful possibility: no matter what we have done, we can still be saints.  Like the son in the parable, we can change our minds – and change direction.  We can make that journey.

And we have good company for the trip.  Not only the communion of saints, the great “cloud of witnesses” who are praying for us and with us, but also Jesus Christ.   He knows our struggles.  Because he took them on as his own.

“He emptied himself,” Paul wrote, “taking the form of a slave, coming in human likeness; and found human in appearance, he humbled himself, becoming obedient to the point of death, even death on a cross.”

He became one of us.  And then he took it as far as his Father asked him, all the way to the cross.   As Paul wrote elsewhere: he was a man like us in all things but sin.   He “humbled himself” to be one of us – living, struggling, hungering, and dreaming among fishermen and tax collectors, prostitutes and thieves.

And so he walks with us still, as we fumble our way through life — falling, then getting up, with our knees scraped and our hearts broken, as we try in our own imperfect and clumsy way to become what God wants us to be: saints. 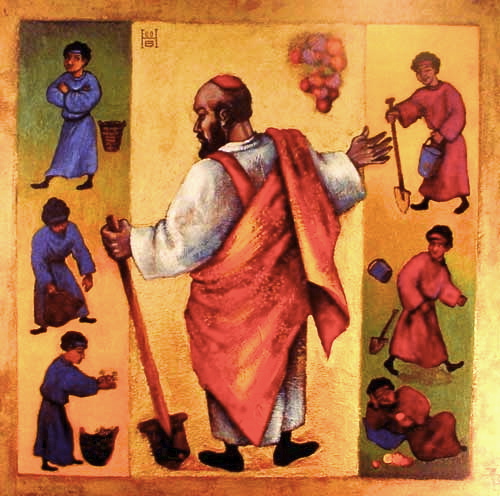 It’s worth remembering: in the parable that we heard, the son who ultimately does the father’s will – and, presumably, is finally saved – isn’t the son who said “Yes.”  It’s the one who at first said “No.”

And that made all the difference.

God gives us that chance again and again, the chance to take another road.  He gave it to Paul and Augustine and Dorothy Day and Mark Ji Tianxang.  And he gives it to us.

And we have it within us to be like them.

No matter how many times we may have said “No” to the will of God, by His grace we still have a chance to say “Yes.”

Prayer for this evening
Top 10
1
Philip Kosloski
This morning prayer is easy to memorize
2
Daniel Esparza
5 Curious things you might not know about Catholicism
3
Philip Kosloski
Did Jesus know his grandparents?
4
J-P Mauro
Reconstructing a 12th-century pipe organ discovered in the Holy L...
5
Philip Kosloski
This prayer to St. Anthony is said to have “never been know...
6
Cerith Gardiner
5 Ways grandparents impact our lives for the better
7
Sarah Robsdottir
What we can learn from Elon Musk’s housing decisions
See More