“I’m sorry, Pope Francis, this is America and we speak English!” 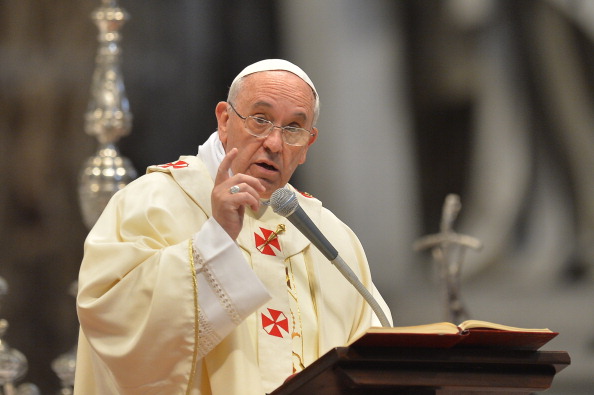 That’s the exact quote of an email I received from a family member the other day; she was offended that Pope Francis would be giving only a few of his speeches here next week in English. Most will be delivered in his native language, Spanish.

Is he trying to make some sort of political statement?  A friend of mine suggested recently that this was the pope’s way of advocating for open borders, and she added: “Every Pope in recent history has not been an English speaker by birth. Every one spoke in English when they came here. But for those who view the US as not exceptional, that is not the trend. And being Pope means to speak in the vernacular when one travels usually.”

While The Vatican insisted there was no symbolism to the pope’s decision, the choice could put him in the middle of the country’s increasingly vicious debate over who belongs here and what it means to be an American. The United States, with 41 million native Spanish speakers, is second only to Mexico as a Spanish-speaking country.

No one captures the destructive discourse of American xenophobia more than Mr. Trump, who earlier this month exhorted G.O.P. rival Jeb Bush, who has a Mexican-born wife and is fluent in Spanish, to “really set the example by speaking English while in the United States.”

The simple fact is: while the pope is infallible, his English isn’t.

Francis, born Jorge Mario Bergoglio in Argentina, learned Italian from his immigrant parents and grandparents  He’s fluent in Latin, in part because while he was studying for the Jesuit priesthood students were expected to converse in Latin during free time, according to papal biographer Austen Ivereigh. Ivereigh says then-Father Bergoglio spent several weeks in Ireland in 1980 working on his English, but without much success. Ivereigh says Bergoglio also studied German while preparing a thesis on the life of a renowned theologian.

Spanish in the U.S. also makes sense for demographic reasons. A sizable percentage of American Catholics—38%, according to CARA—are Hispanic. And the number is growing.  A few years ago, one study reported Hispanics accounted for 70% of the Catholic growth in the United States—and if trends continue, Hispanics could make up the majority of Catholics in this country by 2035. If Francis wants to speak to the future of the American Catholic Church, his language of choice should be Spanish.

Maybe we’re just spoiled. We have become accustomed, I think, to popes who speak multiple languages with ease. John Paul took his own advice, “Be not afraid!,” and fearlessly delivered homilies and speeches in heavily accented English every time he came to the U.S. (He was a polyglot, who was fluent in at least eight languages.) Benedict, likewise, offered remarks and homilies in clipped English in 2008; he speaks five languages and reads two others, Greek and Hebrew.

Pope Francis, though, is another story:

The night Francis was elected in March, 2013, I asked retired Cardinal Theodore McCarrick if the new pope spoke English well. “I have no idea,” McCarrick said.  “We always speak Spanish with each other.” The pope has admitted he struggles with English, using the Italian word stonatissimo to describe his difficulties.  It translates as “very tone deaf.”

Lest we forget: almost exactly 50 years ago, the first pope to visit the United States, Paul VI, delivered his most important and historic speech—his fervent plea for peace at the United Nations—in French.