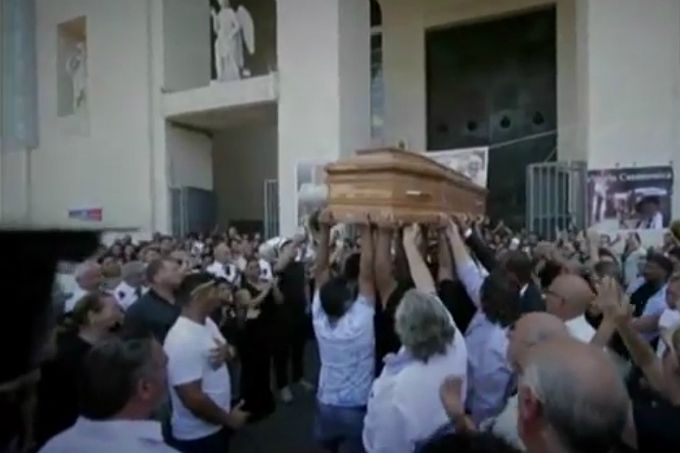 An outlandish funeral for an alleged Italian mob boss, complete with a horse-drawn carriage, flower petals strewn from a helicopter and a brass band playing theme music from the movie “The Godfather” was slammed by Rome’s politicians Thursday as an intolerable display of impunity. Hundreds gathered outside the church of San Giovanni Bosco on the outskirts of Rome to pay their respects to Vittorio Casamonica, 65, who’s been identified as the leader of the Casamonica clan, which has previously been accused of racketeering, extortion and drug trafficking. According to local authorities, Vittorio Casamonica was “on the margins” of organized crime and hasn’t surfaced as a suspect in recent mafia probes. Banners outside the church described him as the “King of Rome” and pictured him alongside the colosseum and St. Peter’s Basilica. “You conquered Rome, now you’ll conquer paradise,” read another. The scene was broadcast across local TV stations all afternoon and evening. The pastor, Rev. Giancarlo Manieri, said he had no control over what happened outside of his church, and according to ANSA news agency, the funeral ceremony inside was not atypical.