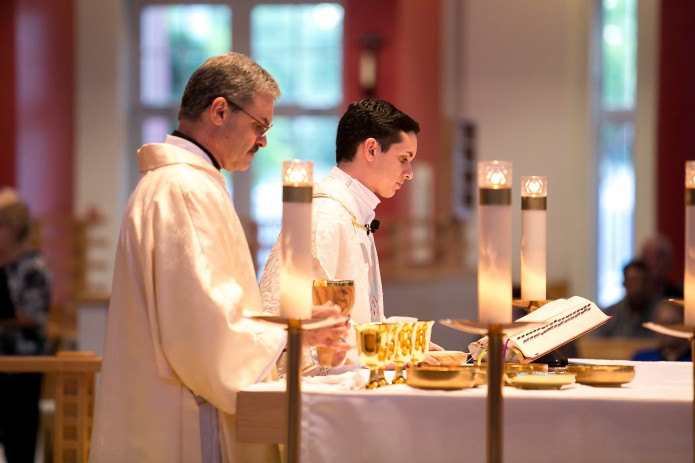 From The Georgia Bulletin:

When the economic recession of the early 1990s hit the Garcias in a personal way, the Miami family with Cuban roots on both sides was in serious danger of collapse. “We went through some rocky times in our marriage when we lost my computer business, but what saved our marriage was an invitation to a charismatic group,” recalled Deacon Carlos Garcia, who these days is a technology specialist at Christ the King School in Atlanta. He is also an ordained permanent deacon for the Atlanta Archdiocese since 2013. In the 1990s, Garcia became a core member of the charismatic assembly at his Florida parish and eventually invited his wife, Dalila, a public school teacher, to join the weekly prayer group, “and that is when our relationship started really growing.” The two went on to establish a lively parish youth ministry in Miami, which soon included participation of their oldest son, Michael. The youngster was already expressing an interest in the priesthood when he was still in middle school, but he respected his parents’ decision to at least finish high school before giving the matter too much weight. After making his confirmation and as he was finishing high school, he still talked confidently about a calling from God. “He was 17 years old and he said to us, ‘Why prolong what God is calling me to do?’” Deacon Garcia said of his son, who along with five other men was ordained a priest for the Archdiocese of Miami on May 9. …Deacon Garcia thinks his son will make a fine priest who has a gift for speaking the truth to people but in a gentle, thoughtful way, which aims to build up the local church. Michael, he said, was always known for finding something good in popular culture and has a knack for examining popular films such as the “Lord of the Rings” series for Christian themes. “He has always been the quiet type, who used to build things with his hands, and likes creating something. That now relates to his ministry and how he wants to build up the church, the body of Christ that fills the (church) buildings.” As for the unique father-son vocational relationship, Deacon Garcia said he is personally aware of only one other family with a permanent deacon whose son was later ordained a priest: Deacon Dennis Dorner, chancellor for the Atlanta Archdiocese, and his son, Father Dennis Dorner, a priest of the archdiocese.

There’s much more. Read it all.

Footnote: the “unique father-son vocational relationship” is becoming more common, as the diaconate grows and its influence on family life spreads. I’m hearing more and more about sons of deacons becoming priests.  Beyond that, I know of at least two bishops whose fathers were permanent deacons.