Blase J. Cupich, Archbishop of Chicago, today announced the appointment of Rev. John Francis Kartje as the rector / president of the University of Saint Mary of the Lake / Mundelein Seminary, effective August 28,2015. Archbishop Cupich made the announcement this evening at the conclusion of the Mass of the Holy Spirit which celebrated the beginning of the academic year. Father Kartje succeeds Bishop-elect Robert E. Barron who was appointed an auxiliary bishop of the Los Angeles Archdiocese by Pope Francis on July 21, 2015. 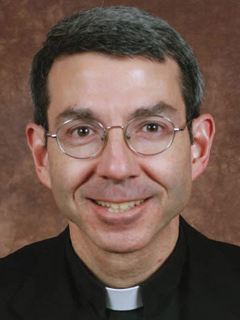 “Father Kartje is a well-respected priest in the Archdiocese of Chicago, with a keen mind, pastoral heart and mature personal spirituality,” said Blase J. Cupich, Archbishop of Chicago. “These qualities will serve him well as he takes on this new office. I am confident he will build on the already well established tradition that has distinguished Mundelein Seminary both nationally and internationally.” Father Kartje has served at the seminary since 2009 as the Acting President of the Pontifical Faculty of Theology, Assistant Professor in the Department of Biblical Studies, Seminarian Spiritual Director and team member of the Formation Faculty. He has also served since 2009 as a summer program faculty member of the Institute for Priestly Formation in Omaha, Nebraska, and was Director and Chaplain of the Sheil Catholic Student Center at Northwestern University from 2009 to 2013. While he completed doctoral studies in scripture at The Catholic University of America from 2004 to 2009 he served at St. Thomas the Apostle Parish in Washington, D.C. After his ordination he served as Associate Pastor at St. Benedict Parish in Chicago from 2002 to 2004. “Father Kartje represents the spirit of St. Mary of the Lake Seminary,” said William H. McEssy, Chairman of the Mundelein Seminary Board of Advisors. “His intellectual and academic prowess are matched by his exceptional commitment to the formation of our seminarians in the compassionate pastoral tradition that has characterized our Archdiocese and been a gift to the global Church.” A native of East Chicago, Indiana, Father Kartje is a graduate of Bishop Noll Institute in Hammond. He earned a Bachelor of Arts degree in Mathematics and a Bachelor of Science degree in Physics in 1987 from the University of Chicago. In 1995, the University of Chicago’s Department of Astronomy and Astrophysics conferred a Ph.D. degree on Father Kartje. The title of his doctoral dissertation is “Models of the Optical/Ultraviolet Continuum Polarization in Active Galactic Nuclei: Implications for Unification Schemes.” Father Kartje was ordained in the Archdiocese of Chicago and received a Bachelor of Sacred Theology degree from the University of St. Mary of the Lake in 2002. He earned a Doctorate in Sacred Theology from the Catholic University of America’s Department of Biblical Studies in 2010. The title of his dissertation is “Wisdom Epistemology in the Psalter: A Study of Psalms 1, 73, 90, and 107.” “I am humbled by the honor of serving our Archdiocese and the Church as rector / president of Saint Mary of the Lake University / Mundelein Seminary,” said Father John Francis Kartje, newly appointed rector / president. “This is a place where I found peace and support as I fulfilled my vocation and I look forward to helping form men for the priesthood and teaching others about the faith through our many programs.” “I have known Father Kartje as a colleague and brother priest for many years,” said Bishop-elect Robert E. Barron, former rector / president of Saint Mary of the Lake University / Mundelein Seminary. “His ability to reach and inspire the minds and hearts of seminarians is extraordinary and I look forward to watching as his leadership moves our alma mater to even greater achievement heights in faith and scholarship.”

A little Googling reveals that he is on Twitter (@Astro_Priest) — though it doesn’t appear he’s posted anything in over a year. He’s also on LinkedIn. The curious can also see a

YouTube video of him doing a Theology on Tap
last year.

A profile from three years ago offered this:

Students, administrators and Evanston residents all say Kartje’s unusual approach and background are major reasons why they come to Mass, despite his apparent ordinariness. “Father John has a different style,” says Sheil Director of Operations Teresa Corcoran. “I think Father John is really able to communicate with the students. Most people find his homilies extremely engaging … there’s usually a challenge in there somewhere.” Nowadays, Sheil’s community is thriving—in large part thanks to Kartje, although a strong foundation had been developed several years before he arrived in Evanston. Sheil just came off a five-year, $1.5 million renovation project and is working with about half of Northwestern’s 2,000 Catholic students every year, Corcoran says. But the leader of Northwestern’s sizeable Catholic community was once just a boy passionate about science and astronomy. Many people believed that reason would diminish his faith, but even as a kid, Kartje had tried to take two important parts of his life—faith and science—and create a more sensible world.