Praying with the sheep: pope joins faithful in the pews for Mass at St. Peter’s 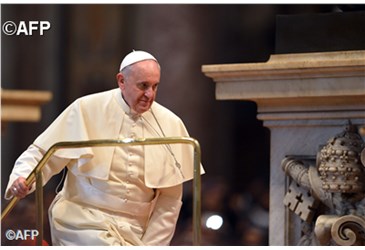 Does anyone recall a pope ever doing this? From Vatican Radio:

Pope Francis surprised the faithful in St. Peter’s Basilica on Friday when he attended the 7:00 morning Mass at the Altar of St. Pius X in the church. It was the feast day of the saint. The Mass was celebrated by Msgr. Lucio Bonora, an official of the Vatican’s Secretary of State, who was unaware the Pope planned on being there. When he was informed Pope Francis was praying at the altar, he asked if he should go back to the sacristy, but was told to say Mass as usual. “When [Pope Francis] saw me, he told me he came to pray because he had already said Mass earlier in the Casa Santa Marta, and he wanted to pay his respects to St. Pius X,” Msgr. Bonora told Vatican Radio. “When he say I had come to celebrate Mass, he wanted to remain, to stay there with the faithful, attend Mass and pray,” he said. Msgr. Bonora said Pope Francis greeted the faithful during the sign of peace. “It was very moving for me, and for the faithful, to see the Pope as a humble member of the faithful, going to pray at the tomb of St. Pius X,” the priest said. Msgr. Bonora said Pope Francis told him he has a strong devotion to Pius X, and prayed especially for catechists, since in Buenos Aires the feast serves as the Day of Catechists.

The AP also has this:

When it was time to receive Communion…the pope lined up along with the other faithful.

Perhaps worth noting: this unusual occurrence took place on the feast of St. Pius X, sometimes known as the “Pope of the Blessed Sacrament”:

Pius X combined within himself a strong sense of compassion,benevolence and poverty, but also stubbornness and a certain stiffness. He wanted to be pastoral in the sense that he was the only pope in the 20th century who gave Sunday homily sermons in the pulpit every week.After the 1908 Messina earthquake he filled the Apostolic Palace with refugees, long before the Italian government acted. He rejected any kind of favours for his family; his brother remained a postal clerk, his favourite nephew stayed on as village priest, and his three sisters lived together close to poverty in Rome.  He often referred to his own humble origins, taking up the causes of poor people. I was born poor, I have lived poor, and I wish to die poor. …He placed a renewed liturgical emphasis on the Eucharist, saying, “Holy Communion is the shortest and safest way to Heaven.” To this end, he encouraged frequent reception of Holy Communion. This also extended to children who had reached the “age of discretion”, though he did not permit the ancient Eastern practice of infant communion. He also emphasized frequent recourse to the Sacrament of Penance so that Holy Communion would be received worthily. Pius X’s devotion to the Eucharist would eventually earn him the honorific of “Pope of the Blessed Sacrament,” by which he is still known among his devotees. In 1910, he issued the decree Quam Singulari, which changed the age at which communion could be received from 12 to 7 years old, the age of discretion. The pope lowered the age because he wished to impress the event on the minds of children and stimulate their parents to new religious observance; this decree was found unwelcome in some places due to the belief that parents would withdraw their children early from Catholic schools, now that First Communion was carried out earlier.