The veterinarian, husband and father who became a priest 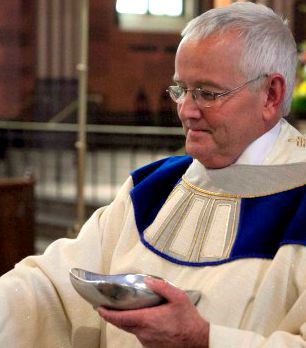 Some may remember when I posted on Frederick Richard Lesser, a widower who was ordained a deacon earlier this year.

Frederick Richard (Rick) Lesser, the widowed father of three grown children, was ordained today [June 20] as a priest of the Roman Catholic Diocese of Albany. The ceremony was celebrated by Bishop Edward B. Scharfenberger at the Cathedral of the Immaculate Conception, in Albany.

Father Lesser, 61, a retired equine veterinarian from South Bethlehem, has said of his ordination, “I am grateful for the life full of joys and sorrows that I have been blessed to live. Through it all, I have come to know that God loves me, and is never far from me.  I pray that I may be used by Him to give others that same great gift.”

Participating in the ceremony were his children, Evan, Craig and Taryn, who presented his vestments. Former pastors Revs. Jim Kane and Vince Ciotoli vested him.  His brother John D. Lesser was one of the lectors. Father Lesser’s other siblings, Kathy Callahan, Mary Lesser, James M. and Thomas P. Lesser were the gift bearers.

He’ll celebrate his First Mass of Thanksgiving as a priest at 2:30 on Sunday at St Pat’s Ravena – Father’s Day!  His children will again serve at the Mass where they were all baptized and received their First Holy Communion, and where his family last gathered for his late wife Marilyn’s funeral in 2005.

The Bradford, PA native described a life that took a very different turn, from Catholic schools in northwestern Pennsylvania to Penn State University and later Cornell University where he ultimately earned his doctorate in Veterinary Medicine in 1981.

It was at that school that he met Marilyn Schmidt, the woman he was to marry. The two opened the Equine Clinic at OakenCroft in South Bethlehem in the mid-1980s. Over nearly three decades Father Lesser estimates their practice has served horses and horse owners in New York and Massachusetts. After Marilyn passed away nine years ago, he again considered the priesthood.

As a parishioner at St. Patrick’s in Ravena he had been active in church life. As a widower and with his children pretty much on their own, he began to realize this new path was clearer to him. “I felt that God was calling me…I see the hand of God helping clear the way with this,” Father Lesser has said, adding that he was blessed with knowing a number of good priests and religious women who have fostered this calling within him. He specifically mentioned the support and encouragement he has received from Albany Bishop Emeritus Howard J. Hubbard, and the two men who have directed the Office of Vocations over the past few years, Revs. James Walsh and Anthony Ligato.

He received his Masters in Divinity from St. Bernard’s School of Theology and Ministry in Albany, and then attended the Pope St. John XXIII National Seminary in Boston, a school that focuses on men who are called later in life to pursue the priesthood.