Worth a thousand words, Anglican edition 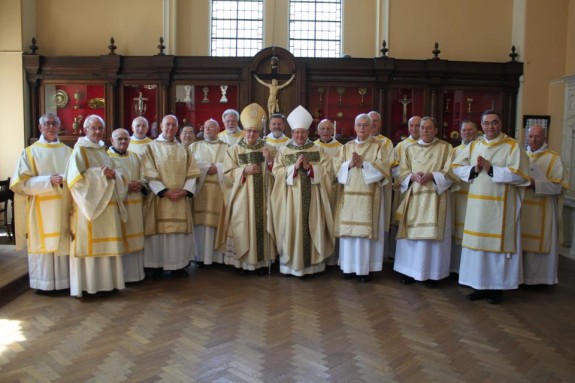 Behold, the 17 new Catholic deacons—soon to be priests—who were once Anglican priests in the UK.

They were ordained today for the Personal Ordinariate of Our Lady of Walsingham.

UPDATE: This item crackled across the wire yesterday, with news about the ordinariate in the United States:

A former Episcopal priest, Matthew Venuti of Mobile, Alabama, will make history when he becomes the first priest ordained for the Catholic Ordinariate of the Chair of St. Peter. The U.S.-based ordinariate was created by Pope Benedict XVI to welcome Anglican groups and clergy seeking to become Catholic while retaining elements of their Anglican heritage. It is equivalent to a diocese, but national in scope. Mobile Archbishop Thomas J. Rodi will ordain Venuti a priest on Saturday, June 2, 10 a.m. at the Cathedral Basilica of the Immaculate Conception, 2 South Claiborne Street, Mobile, AL 36602, along with four priests for the Archdiocese of Mobile. Venuti’s ordination will be followed by 29 more ordinations of former Anglican priests across the United States this summer. They include hospital executive Jon Chalmers on June 3 in Greenville, South Carolina, followed by a father and son in Fort Worth, Texas; an editor of a major Catholic website in Virginia; military chaplains; and former Anglican priests in Arizona, California, Iowa, Maryland, Pennsylvania and other states.

There’s more at the link.