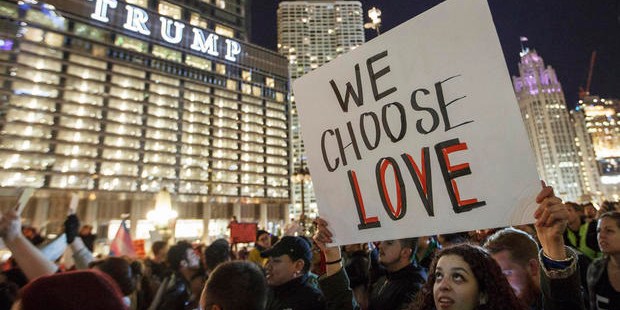 I wish we could say that now.

It hasn’t been a quiet week in Lake Woebegone—or in America.

Monday, I read about a cashier who worked at Trader Joe’s, who saw a Muslim neighbor of hers in the checkout line. She had a basket full of groceries. The cashier asked her if she was planning a big party. She nervously replied no and explained that she was stocking up. She was afraid that after the election her family might not be able to leave their house.

After Tuesday, that doesn’t sound farfetched.

There have been reports from around the country of Hispanics being bullied, of Muslims being mocked, of immigrant children leaving school in tears.

There have been protests in the streets, night after night—one anti-Trump march in Portland has even been labeled a “riot.” Windows have been smashed, flags burned. At least one person has been shot.

The world is on edge. Spend time on social media, and you see it again and again: the atmosphere is toxic, the exchanges poisonous. The insults never end.

The divide has grown wider, the chasm has become deeper, the tensions only more inflamed.

“Sometimes there comes a crack in Time itself.”

It feels like we are in the middle of that crack, that chasm. And we are falling. Nothing anymore feels certain.

This Sunday’s gospel reading sounds less like a prophecy, more like journalism. The stones have fallen. The temple of our national politics has crumbled. Nation is rising up against nation—political supporters attacking one another.

But in the middle of this, we encounter the words that we hear so often in scripture during times of challenge and change—words that sound almost counterintuitive and, frankly, incredible:

“Do not be terrified.”

Do not be afraid…for the troubles of this age are fleeting.

Do not be afraid…for perfect love casts out all fear.

And perfect love has a name. It is Jesus.

As I mentioned last week, quoting a sign outside a Protestant church: “Whoever wins the election, Jesus Christ is still king.”

Next Sunday, of course, we mark the Feast of Christ the King. But first, this gospel draws our liturgical year to a close—and it reminds us that to be a follower of Christ the King is to face suffering, even a kind of martyrdom.

But we remember, too, that to be a martyr means to be a witness.

The greatest witness each of us can offer right now, at this time and in this country, is to stand in defiance of hate.

We must do as Christ commanded us: love one another.

We love one another when we have the openness and patience to listen to others with respect and to give them dignity—even those with whom we passionately, vehemently disagree.

We love when we have the courage to stand up for those who are put down—no matter what their race, their religion, their gender, their nationality.

We love when we have the humility to unclench our fists and extend a hand—to offer support, or mercy, or help.

We love when we use those hands to pick up bricks—not to be thrown, but to build bridges.

This is to love as Christ, with Christ, for Christ—to be the face of Christ to the world.

How easily and quickly, it seems some of us have forgotten the words we heard just 12 days ago, on the Feast of All Saints: “Blessed are the peacemakers, for they will be called children of God.”

We are called to be peacemakers.

On Christmas in 1967, one of the great peacemakers of the 20th century, Martin Luther King, Jr., delivered a sermon devoted to the subject of peace. It came during a time of terrible conflict and fear, amid the Vietnam War and the struggle for civil rights. It would be his last Christmas sermon; four months later, he was dead from an assassin’s bullet.

But that Christmas, he had this to say:

And he spoke about one of the Greek words for love, agape:

“Agape,” he noted, “is understanding, creative, redemptive good will toward all men. When you rise to love on this level, you love all men not because you like them, not because their ways appeal to you, but you love them because God loves them. This is what Jesus meant when he said, ‘Love your enemies.’”

“I think this is where we are, as a people, in our struggle for justice. We can’t ever give up. We must never let up in our determination to remove every vestige of segregation and discrimination from our nation, but we shall not in the process relinquish our privilege to love.”

Remember that: we shall not “relinquish our privilege to love.”

Love your enemies—whether it’s Hillary Clinton or Donald Trump. Pray for them, both of them, and all those who supported them and are feeling anger or despair or frustration or fear.

Love the Muslim in the checkout line and the Hispanic at the bus stop. Love the child who feels different and outcast and scared.

Love the stranger who is feeling unwelcomed and who needs to hear these words of Christ: “Do not be terrified.”

Seek to build up, not tear down. And remember the words of Dr. King, words that should be self-evident to us all:

Every man is made in the image of God.

During this fraught and fearful time, when the nights have grown long and the world has turned cold, hold fast to the words of scripture—words that offer light and hope, words we will hear again, soon enough, on Christmas Day:

Work for justice. Pray for peace. Love your enemies.

And do not be afraid.