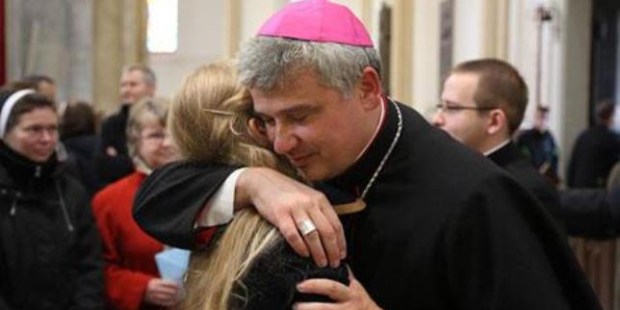 The Papal Almoner, Archbishop Konrad Krajewski, has been responsible for the installation of showers, a barbershop and a laundromat near the Vatican, as well as other initiatives on behalf of the poor, including a new dormitory.

What fewer people know, however, is that behind the scenes the Polish archbishop has also given up his Vatican apartment for refugee families fleeing war torn areas, and has for several months been sleeping in his office.

Born in Lodz on November 25, 1963, the Polish archbishop is taking seriously the task Pope Francis entrusted to him when he was appointed in 2013.

“Sell your desk; you don’t need it,” the pope told him at the time. “Don’t wait for people to come ringing. You need to go out and look for the poor.”

When he learned of the arrival of a pair Syrian who a few days ago had a baby, Krajewski has sold his apartment and moved the office on the top floor of the building.

For a few weeks he lived in a room on the ground floor, then moved to the top floor have a little privacy. In an interview with La Repubblica the chaplain said that what he did is a normal thing, “nothing unusual.”

“There are many priests in the world, not just recently, behave like this. Charity and sharing are in the DNA of the Church. To each he is asked something according to his task. I have no family, I am a simple priest. To offer my apartment doesn’t cost me anything,” he said.