Artist behind ‘Homeless Jesus’ donates St. Pio replicas for foundation—and now you can own one 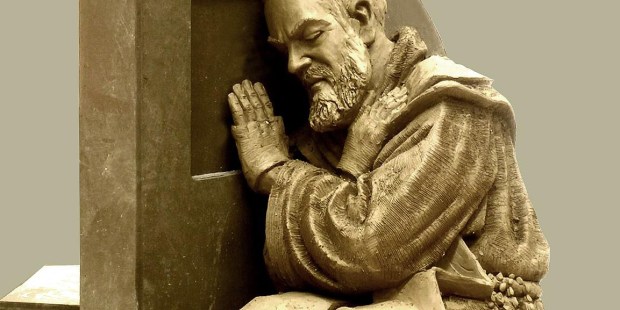 You may also remember an interview I did last winter with famed sculptor Timothy Schmalz, creator of the “Homeless Jesus” statue that has become ubiquitous.

Now those two worlds have come together.

A press release from the foundation today notes:

We are happy to announce our partnership with Tim Schmalz, an artist and sculptor devoted to creating art that glorifies Christ. For over 20 years, Tim has been sculpting large scale bronze monuments for the Catholic church. His worldwide fame arose from his creation of the “Homeless Jesus”, also known as “Jesus, the Homeless,” a bronze sculpture depicting Jesus as a homeless person asleep on a park bench. The original sculpture was installed at Regis College, University of Toronto, in early 2013. It has been reported by National Public Radio that a replica of this sculpture will be installed on the Via della Conciliazione, the street leading to St. Peter’s Basilica. Schmalz visited the Pope in Vatican City in November, 2013 to present a miniature version of his statue. “He walked over to the sculpture,” Schmalz said, describing the Pope’s reaction, “and it was just chilling because he touched the knee of the Jesus, the Homeless sculpture, and closed his eyes and prayed. It was like, that’s what he’s doing throughout the whole world: Pope Francis is reaching out to the marginalized.” Catholic Charities of Chicago and the Archdiocese of Washington, D.C., have both had replicas installed outside their offices, andPope Francis visited the sculpture installed along G Street in Chinatown, Washington, D.C., during his 2015 visit to the United States.

Tim has agreed to donate replicas of another his artworks to the Saint Pio Foundation. His sculpture “St. Padre Pio – I Absolve You” represents Saint Pio as confessor and reveals the face of Jesus through the confessional window. It is our hope that these works of art will inspire our supporters to share a message of mercy and hope to all those that they encounter in their daily lives.

The St. Pio sculpture is available in two sizes, for $50 (5″ tall)and $200 (14″), and you can also buy in bulk for a discount.  Both items are composed of resin-stone and finished in bronze.