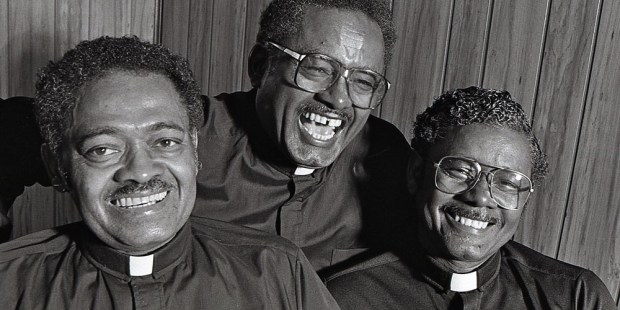 Share
Print
Deacon Greg Kandra - published on 02/23/18
From the Catholic Standard, here’s a great profile of love and service, featuring brothers who are deacons in the Archdiocese of Washington:

In the fall of 1987, Deacons Joseph, James and John Somerville were interviewed and photographed by the Catholic Standard newspaper of the Archdiocese of Washington, for a story that noted their distinction then of being the only three brothers in the United States to be serving as permanent deacons in the Catholic Church.

Describing the close-knit brothers, the article said their joint interview “was peppered with jolly laughter and gentle teasing. The three men sat in adjoining chairs, seeming to fit together as comfortably as the fingers in a well-worn leather glove.”

That article began by noting that when the Somerville brothers were children, they sometimes raced each other as they ran a few miles to attend Mass at their nearby parish, St. Joseph in Morganza, because there wasn’t room for all 10 children in their Southern Maryland farm family to ride to church together.

Deacon Joseph Somerville, the oldest of those three brothers, died in 1996 at the age of 69. A retired D.C. police officer, he and his wife Harriet had seven children, and he served many years as a deacon at Our Lady Queen of Peace Parish in Washington.

This past fall, the two surviving Somerville deacon brothers met a Catholic Standard reporter again, 30 years after the first interview, at the home of Deacon John Somerville in Loveville, Maryland, located on the property where their father once farmed tobacco, corn, wheat and soybeans. Deacon James Somerville lives nearby, and the two attend daily Mass together at St. Joseph Church in Morganza, where they grew up and received the sacraments.

“I was born and raised about a mile from here,” said Deacon John Somerville.

Both brothers are now retired from their professional and church work.

Deacon John Somerville, who is now 87, worked for many years at the National Security Agency and served as a deacon at the Basilica of the National Shrine of the Immaculate Conception and St. Margaret of Scotland Parish in Seat Pleasant.  Deacon James Somerville, who turns 89 on Feb. 25, worked as a supervisor for the Maryland Highway Department and served as a deacon at St. Joseph Parish in Morganza and assisted former Washington Auxiliary Bishops Leonard Olivier and William Curlin, both of whom are now deceased.

As with the first interview, the follow-up gravitated quickly to the lessons the men had learned from their parents, Dellie and Susie Somerville.