From the Synod: Chicago’s Cupich on divorce, conscience, reconciliation 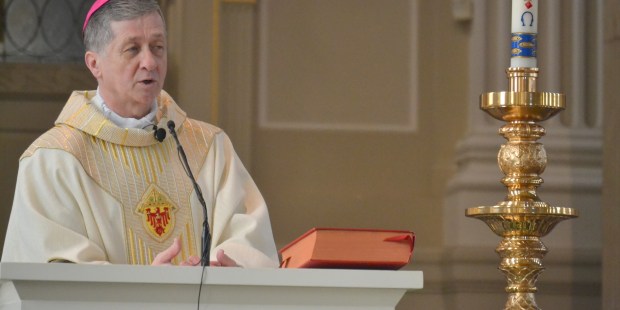 The Catholic church has to respect decisions divorced and remarried people make about their spiritual lives after they examine what their conscience is telling them to do, Chicago’s Archbishop Blase Cupich said during a press briefing.

Cupich — one of nine Americans attending the ongoing Oct. 4-25 Synod of Bishops and one of four personally appointed by Pope Francis — said that when he counsels divorced and remarried persons he always tries “in some way to understand them.”

Citing the Latin root for the word reconciliation — which indicates not only forgiveness but a seeing of eye-to-eye — the archbishop said: “If that’s the case, then not only do I have to understand them but I also have to see how they understand me.”

“I try to help people along the way,” said Cupich. “And people come to a decision in good conscience.”

“Then our job with the church is to help them move forward and respect that,” he said. “The conscience is inviolable. And we have to respect that when they make decisions and I’ve always done that.”

Cupich was speaking Friday in a small briefing with journalists at the Vatican on the progress of the synod, a worldwide meeting of Catholic prelates called by Francis to focus on issues of family life.

The story concludes with this poignant and provocative example:

….Cupich told a story he said a priest had told him of celebrating a funeral for a young man who had committed suicide. The man’s mother, he said, was divorced and remarried and also “very angry” at God and the church over what had happened.

When she came forward for Communion at the funeral Mass, she folded her arms to indicate she wanted to receive a blessing. The priest said to her: “No, today you have to receive.”

“She went back to her pew and wept uncontrollably,” said the archbishop. “She then came back to visit with the priest and began reconciliation.”

“Her heart was changed,” said Cupich. “She did have her [first] marriage annulled; her [second] marriage is now in the church.”

“But it was because that priest looked for mercy and grace to touch her heart,” he said. “That’s something we have to keep in mind. And I think the Holy Father has talked about that. It’s not a straight line.”

Read it all. There’s much more.