Ordination update: 5 new deacons for Green Bay—and one is a TV reporter 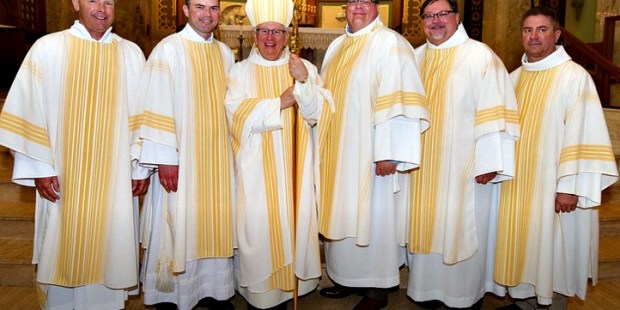 Share
Print
Deacon Greg Kandra - published on 05/23/17
From The Compass, the story:

Robert Hornacek regularly asks questions as a reporter for WLUK FOX 11 News, but it was a question asked of him that led to his faith journey and, eventually, the diaconate. Bob Hornacek was ordained a deacon by Bishop David Ricken on Saturday, May 13, at St. Francis Xavier Cathedral. He will serve his home parish, St. Matthew in Allouez.

Deacon Hornacek grew up in the Milwaukee area. He was baptized Lutheran, but his family did not regularly practice their faith.

“I remember for a short period of time our family went to church, an evangelical Christian church,” he said. “I remember listening to the Packer games on the radio on the way home. That’s it. Faith was just not a big part of our life. My grandma was in Oshkosh. She was Lutheran, so on Christmas and Easter the family would sometimes go to church. Family was important, but the faith component wasn’t really there.”

While attending UW-Milwaukee, Deacon Hornacek met his wife, Jennifer, a student at Marquette University and a Catholic.

“I remember thinking, ‘Oh, you’re Catholic, I really don’t know what that entails,’” he said. “Fast forward a couple years, we got married at her home church in Bloomer (Wis.). I was just out of college. I never considered myself atheist. I thought it was a little presumptive to say there was no God.”

In 1999, the couple moved to Green Bay, where they planned on staying for two years before moving to a bigger city. When Jennifer became pregnant with their first child, they reconsidered their plan to move. They felt that Green Bay was a nice place to raise a family, so they bought a home.

“We had an inspector come by (the house),” explained Deacon Hornacek. “He said that people really like this neighborhood because of the school. ‘What school?’ ‘The one at the church.’ It was two blocks away from (St. Matthew). God’s ways are not our ways.”

He still did not have much of a faith life, but wanted to raise his children Catholic because of Jennifer’s faith. When Hornacek visited the parish office to register to have his son baptized, he met Kay Schumacher, pastoral associate at the time. When she discovered that he was not Catholic, she asked if he would like to learn more about the faith.

The rest is history. Read on.

And read more about all the new deacons of Green Bay here.