Pentagon: “Better than even” chance Father Emil Kapaun’s body will be found 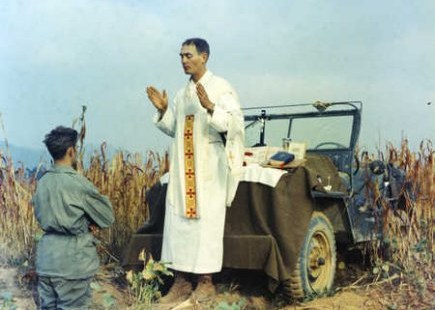 Share
Print
Deacon Greg Kandra | Jul 12, 2016
Details about recovering the remains of a man many pray will one day be declared a saint:

The senior Pentagon analyst in charge of finding Korean War troops missing in action says there is a “better than even” chance that the body of Medal of Honor soldier Father Emil Kapaun will eventually be found buried in a national cemetery in Hawaii.

Finding Kapaun’s remains would be big news, not only to the U.S. military – which awarded him the Medal of Honor in April – but to the Catholic Church, which is deciding whether the Kansas native and Army chaplain will become a saint.

“It would be wonderful,” said Maj. Gen. Donald Rutherford, a Catholic priest who is the chief of chaplains for the U.S. Army. “It would be great, especially as the church is moving toward canonization.”

Friends of Kapaun’s who were prisoners of war say Chinese Army guards buried Kapaun in a shallow unmarked grave after he died of starvation and disease in a North Korean prison camp in May 1951. The assumption since then by the Army has always been that Kapaun’s remains are still there.

But Pentagon analyst Philip O’Brien, an authority on Korean War soldiers missing in action, said he thinks Kapaun’s remains may have been resting since 1954 in the National Memorial Cemetery of the Pacific, the cemetery in Hawaii better known as the “Punchbowl.” Hundreds of unknown soldiers and other veterans from several wars lie there.

“My best belief, a presumptive belief, is that we have a good chance, better than even, of having Father Kapaun in possession right now,” O’Brien said.