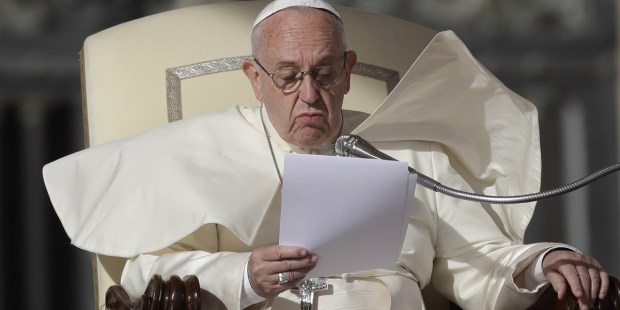 AP/EAST NEWS
Share
Print
Deacon Greg Kandra | Nov 02, 2017
This news shouldn’t really surprise anyone, since Francis has said he’s open to considering just such a move. The Anglican Ordinariate includes married priests—as do the Catholic Eastern rites. In all cases (as with married deacons), it follows the timeless tradition of the Church: a married man may be ordained, but an ordained single man can not get married.

Pope Francis has requested a debate over allowing married men in the Amazon region of Brazil to become priests, in a controversial move that is likely to outrage conservatives in the Church, Vatican sources say.

The pontiff took the decision to put a partial lifting of priestly celibacy up for discussion and a possible vote by Brazilian bishops following a request made by Cardinal Claudio Hummes, the president of  the Episcopal Commission for the Amazon, Il Messaggero newspaper quoted the sources saying.

Cardinal Hummes reportedly asked Francis to consider ordaining so-called viri probati, married men of great faith, capable of ministering spiritually to the many remote communities in the Amazon where there is a shortage of priests, and evangelical Christians and pagan sects are displacing Catholicism.

The cardinal’s request has been echoed by Monsignor Erwin Krautler, the secretary of the Episcopal Commission. He has also suggested that the bishops attending the synod in 2019 on the Amazon, now being prepared in Rome, should consider ordaining women deacons as priests.

Monsignor Krausler quoted the Pope as telling him “speak to the bishops and tell them to make valid proposals,” about such ordinations, the Austrian news agency KNA said.

Francis said earlier this year that the Church should consider allowing married men to become priests in specific circumstances, effectively reversing the centuries-old practice that Roman Catholic priests must be celibate.

In an interview with Germany’s Die Zeit newspaper, the pontiff said “We must consider if viri probati is a possibility. Then we must determine what tasks they can perform, for example, in remote communities,” he said.