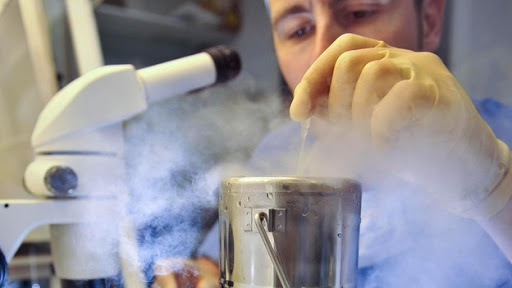 Ben Birchall/PA
Share
Print
Deacon Greg Kandra - published on 05/05/17
From Down Under:

After a six-year IVF journey to receive miracles Lachlan, 4, and 21-month-old twins Charlotte and William, Belinda and Shaun Stafford didn’t know what to do with their remaining embryos. Their babies.

Donation wasn’t an option, the annual storage fee was an added financial strain, and disposing of them unimaginable.

So when the NSW couple heard about Baby Bee Hummingbirds, an Australian company turning embryos into keepsake jewelley, they jumped at the chance.

Now Ms Stafford has all of her babies with her every day – including seven embryos in her heart-shaped pendant worn close to her heart, always.

…Ms Stafford chose a heart pendant through Baby Bee Hummingbirds, so she could carry her babies close to her heart, where they should be.

“We had been on a six-year journey of IVF,” she said.

“It was painful, tormenting, a strain on our marriage and just plain hard.

“Finding this has brought me so much comfort and joy.

“I finally at peace and my journey complete.

“My embryos were my babies – frozen in time.

“When we completed our family, it wasn’t in my heart to destroy them.

“Now they are forever with me in a beautiful keepsake.”

Simcha Fisher, among others, isn’t impressed:

The founder asks, “What a better way to celebrate your most treasured gift, your child, than through jewellery?”

Well, you could let him live, I suppose. You could allow him the basic dignity of spending time in the womb of his mother, to live or not, to grow or not, but at least to have a chance. You could celebrate the life of your child by giving him some small gift of warmth and softness, however brief, rather than letting him travel in an insulated pouch from lab to lab, frozen and sterile from beginning to end. You could conceive a child so as to give him life, and you could rise like a human should above the blind proliferation of biology.

Lest we forget, Catholic teaching on this subject:

One reproductive technology which the Church has clearly and unequivocally judged to be immoral is in vitro fertilization or IVF. Unfortunately, most Catholics are not aware of the Church’s teaching, do not know that IVF is immoral, and some have used it in attempting to have children. If a couple is unaware that the procedure is immoral, they are not subjectively guilty of sin. Children conceived through this procedure are children of God and are loved by their parents, as they should be. Like all children, regardless of the circumstances of their conception and birth, they should be loved, cherished and cared for.

The immorality of conceiving children through IVF can be difficult to understand and accept because the man and woman involved are usually married and trying to overcome a “medical” problem (infertility) in their marriage. Yet the procedure does violence to human dignity and to the marriage act and should be avoided. But why, exactly, is IVF immoral?

…IVF eliminates the marriage act as the means of achieving pregnancy, instead of helping it achieve this natural end. The new life is not engendered through an act of love between husband and wife, but by a laboratory procedure performed by doctors or technicians. Husband and wife are merely sources for the “raw materials” of egg and sperm, which are later manipulated by a technician to cause the sperm to fertilize the egg. Not infrequently, “donor” eggs or sperm are used. This means that the genetic father or mother of the child could well be someone from outside the marriage. This can create a confusing situation for the child later, when he or she learns that one parent raising him or her is not actually the biological parent.

In fact, the identity of the “donor,” whether of egg or sperm, may never be known, depriving the child of an awareness of his or her own lineage. This can mean a lack of knowledge of health problems or dispositions toward health problems which could be inherited. It could lead to half brothers and sisters marrying one another, because neither knew that the sperm which engendered their lives came from the same “donor.”

But even if the egg and sperm come from husband and wife, serious moral problems arise. Invariably several embryos are brought into existence; only those which show the greatest promise of growing to term are implanted in the womb. The others are simply discarded or used for experiments. This is a terrible offense against human life.