Taking a stand: Catholics arrested in D.C. during protest for Dreamers 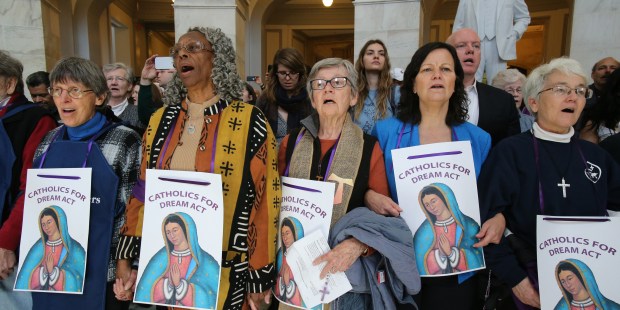 Sisters of Mercy and others pray inside the Russell Senate Office Building in Washington Feb. 27 during a "Catholic Day of Action for Dreamers" protest to press Congress to protect "Dreamers." (CNS photo/Bob Roller) See DACA-CONGRESS-CATHOLIC-LEADERS Feb. 27, 2018.
Share
Print
Deacon Greg Kandra - published on 02/28/18
From CNS:

Dozens of Catholics, including men and women religious, were arrested near the U.S. Capitol Feb. 27 in the rotunda of a Senate building in Washington as they called on lawmakers to help young undocumented adults brought to the U.S. as minors obtain some sort of permanent legal status.

Some of them sang and prayed, and many of them — such as Dominican Sister Elise Garcia and Mercy Sister JoAnn Persch — said they had no option but to participate in the act of civil disobedience to speak out against the failure of Congress and the Trump administration to help the young adults.

“I have never been arrested in my life, but with the blessing of my community, I am joining with two dozen other Catholic sisters and Catholic allies to risk arrest today as an act of solidarity with our nation’s wonderful, beautiful Dreamers,” said Sister Garcia. “To our leaders in Congress and in the White House, I say ‘arrest a nun, not a Dreamer.'”

She said she was there to support those like Daniel Neri, a Catholic from Indiana who was present at the event and would benefit from any legislation to help the 1.8 million estimated young adults in the country facing an uncertain future.

“What are we doing to the body of Christ when are hurting families? When we are hurting people?” he asked.

He also said, he wanted people to know that “we are not criminals, we are not rapists, we are good people.”