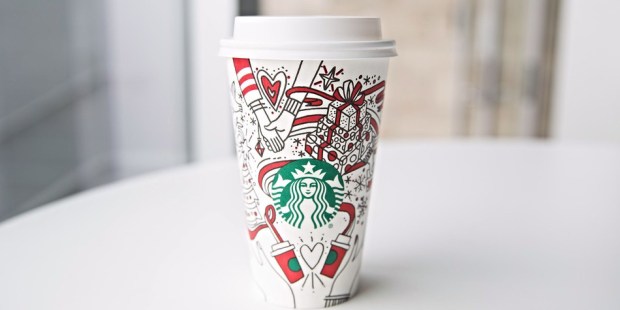 Starbucks’ years-long war on Christmas is over.

The coffee giant wasted no time getting into the Christmas spirit this year, releasing its new holiday-themed cups and holiday beverages on Wednesday. Goodbye, Halloween. Forget Thanksgiving. It’s Christmas time at Starbucks.

The new line of festive liquid holders celebrates the 20th anniversary of the holiday cup, and while the company has broken away from Christmas-y themed cups in the past, the 2017 cups feature a Christmas tree, doves, ornaments, presents, and holiday cards.

In 2015, Starbucks released a“two-toned ombré design, with a bright poppy color on top that shades into a darker cranberry below.” Surprisingly, this drummed up some over-hyped, possibly manufactured outrage, because the cups weren’t Christmas-y enough.

Christmas warrior President Donald Trump even suggested boycotting the company while on the campaign trail, playing hard to his Christian base.

Then, in 2016, the company released a green Starbucks cup, which some wrongfully assumed was the company’s holiday cup. Outrage ensued. A little over a week later, Starbucks rolled out 13 different red holiday cups, created by 13 women from six countries.

In a nod to the adult coloring craze that started a couple of years ago, the chain says the design is meant to serve as a canvas for customers to color-in. It features a pair of hands holding red cups of coffee (a tribute to cups of years past, Starbucks says) connected by swirling ribbons and cheerful holiday scenes with splashes of red and green.

“This year’s cup is intentionally designed to encourage our customers to add their own color and illustrations,” Starbucks executive creative director Leanne Fremar said in a statement. “We love the idea of everyone making this year’s cup their own.”

Hot beverages will also wear “Give Good” cup sleeves – the theme for this year’s holiday campaign.

“Giving good can be as small as someone opening the door for you, or recognizing the people that enrich your life – your child’s teacher, a caregiver, a family friend,” Fremar said. “The holidays are a time to celebrate all the good we give to each other and our community.” (Here are 60 things you can do to fight hunger in America.)

The video announcing the cup is below.