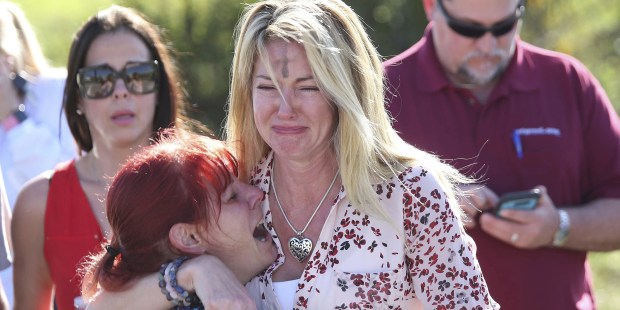 As everyone now knows, a high school there became the scene of a massacre—the worst of its kind since Sandy Hook.

The world has been reeling ever since. The stories are heartbreaking.

The football coach, who dove in front of students and took the bullets—and gave his life.

The students who frantically texted their parents while cowering in a closet: “If I don’t see you again, know that I love you and thank you for everything you did for me.”

And then we come to Mass this morning and hear these words about Jesus, from the first chapter of Mark:

“The Spirit drove him out into the desert, and he remained in the desert for 40 days, tempted by Satan.”

I think back on the stories that have seized our imagination and broken our hearts, with datelines like Columbine and Sandy Hook and Virginia Tech and Orlando and Las Vegas and Parkland, and I feel this needs to be said.

If anyone had any doubts:

Satan is real. And he is relentless.

We see his handiwork. It is everywhere.

Satan is distraction. He is a media culture obsessed with violence and gossip—but which pays far less attention to the troubled pleadings of a teenager on YouTube.

Satan is the ignorance and self-indulgence of our age.

This Lent, don’t just forget it.

This Lent, remember. We need to remember this. To reflect. To repent.

And to resolve to bring about change.

We as a culture and as a people need to turn away from the sins of our age—and all the inaction and distraction, all the ignorance and absence.

Parkland is a cry from the heart. And it makes us realize:

Archbishop Charles Chaput lived through the horror of Columbine when he was archbishop of Denver. And he said this last week:

“We need to be angry,” he said. “Angry at our lawmakers for doing so little to prevent these catastrophes; angry at our news and entertainment media for simultaneously feeding off these tragedies and fueling them with a steady stream of sensationalism and moral incoherence; angry at ourselves for perversely tolerating these things, and then forgetting them until the next round of violence.

He concluded: “Let’s not lie to ourselves that tighter gun restrictions — as vital and urgent as they now are — will solve the problem.  We’ve lost our respect for human life on a much broader scale, and this is the utterly predictable result.”

There have been too many special reports on CNN, too many press conferences from sheriffs and police chiefs, too many funerals where the caskets contain young, small bodies.

This just can’t go on. More than ever, we need to foster a culture of life—a culture of human dignity.

My friend Elizabeth Scalia wrote something on Facebook right after this tragedy happened.

“I can’t help but think,” she wrote, “of how exactly right Pope Benedict XVI was when he said that people MUST hear the words sincerely spoken: ‘It is good that you exist’ and believe them because they are backed up with real love. Without that, we become monsters. Without that, we end up seduced by whatever will accept us.”

Without that, I would add, our lives are a continual desert, where Satan tries to fill the void.

This just can’t go on.

I know there are no easy answers. In the days ahead, people will debate endlessly about gun control. Too often, they will talk past each other because it seems that on that issue only extremes will do. They’ll talk about mental health funding a little.

But will anyone talk about our nation’s spiritual health? We need to.

But this, too, is Satan’s handiwork. He is, after all, the master of misdirection. At a time when we desperately need to hear God, the noise has become overwhelming. He distracts us by sowing disagreement, dishonestly, mistrust and hate, so we become unwilling to hear each other, and are utterly deaf to God.

While there are no easy answers, I would suggest there is one answer we can agree on. It stands before us right now.

It is our True North.

And look to what followed.

Take comfort and courage in knowing that Jesus has conquered death—and that death does not have the last word. That is what Lent is leading us to—the great message of Easter, the triumph of the cross.

On Ash Wednesday, we were marked with the cross. We proclaimed to all who saw us that we belong to Christ.

That morning, hours before the tragedy in Florida, I preached about Lent and the things we should give up, like jealousy and anger.

I spoke, too, about the things we should give, like kindness and mercy, especially to those who are alieanted or hurting or outcast.

But I realize now that list is incomplete. We need to do more.

This Lent, in the spirit of conversion and repentance, we need to give up doing the same things again and again and expecting a different result.

And this Lent, besides giving alms to those in need, we need to give voice—raising our voices in anger, in frustration, in pain.

But most importantly: we also must give voice to the Gospel, to Christ and the teachings of his church. We need to make Christ’s voice alive, through our own voices—but more importantly, through our actions.

In doing this, we may give one more thing this Lent: we can give the next generation a fighting chance. A chance to survive, and thrive, and to have what Christ wants for all of us: a life in full.

We need to. Our faith demands it. As many people mentioned last week, echoing the letter of St. James: faith without works is dead.

And we need to act.

Because this just can’t go on.