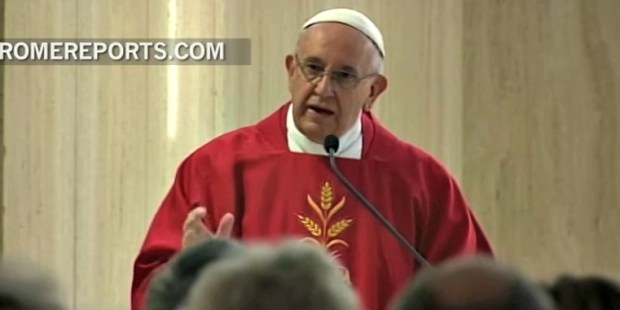 Share
Print
Deacon Greg Kandra | Sep 14, 2016
I believe this is the first time the pope’s daily Mass has been televised live.  Details:

To demand apostasy and “to kill in the name of God is satanic,” Pope Francis said on Wednesday morning at a Mass offered for the repose of the soul of a French priest of Rouen, Father Jacques Hamel, who was slain by two Islamic terrorists in July as he was celebrating morning Mass.

“Today there are Christians murdered, tortured, imprisoned, and slaughtered because they do not deny Jesus Christ. In this history, we come to our Père Jacques: He is part of this chain of martyrs,” Pope Francis told those gathered in the Chapel of Santa Marta on the Feast of the Triumph of the Cross.

“Christians who suffer today — either in prison, or by death or torture — for not denying Jesus Christ reveal the cruelty of this persecution. And this cruelty which demands apostasy — let us say the word — is satanic. And how good it would be for all religious confessions to say: “To kill in the name of God is satanic.”

Among those present at Mass was Archbishop Dominque Lebrun of Rouen, along with 80 other pilgrims from the diocese. On the altar was a simple photograph of Fr. Hamel, who was slain in the Church of Saint-Etienne-du-Rouvray on July 26, 2016.

The liturgy was broadcast live by the Vatican Television Center.

Check out the homily text here.

And watch a report with highlights from the liturgy, courtesy Rome Reports, below”