What do you do when a small child comes up for Communion? 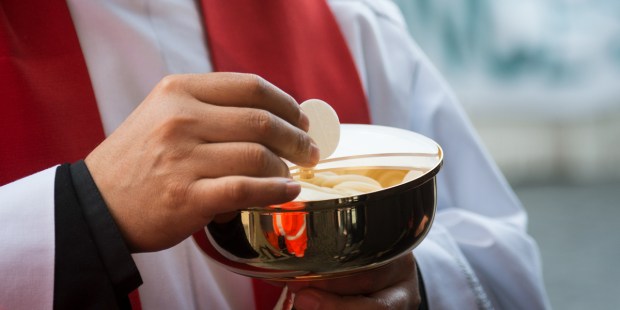 Antoine Mekary | ALETEIA
Share
Print
Deacon Greg Kandra | Jul 16, 2017
I was a little flabbergasted to read this on a friend’s Facebook page:

For the fourth Sunday in a row, my daughter has been denied communion. In fact, since her first Holy Communion in May, she has only been offered the Eucharist at Sunday Mass twice.

My daughter used to adore Mass. Sundays were her favorite day of the week because she got to see Jesus.

Priests and deacons, it is such a simple thing to simply ask a child if he or she has received their first communion. If they look too young to you, just ask. Please. The wounds you inflict upon a child by denying her communion because you think she is too young are real.

If you have any doubts, ask.

Priests, deacons, EMHCs, take note: If you see a child come up for Communion who looks too small or too young to receive, it doesn’t take much effort to look up at the parent and ask, with a smile, “She’s so tiny! Has she received her First Communion?” Or if the child is alone, “Do you know how to receive communion?” or “Have you received your First Communion?” I’ve always gotten a straightforward answer. And I’ve never had a child or a parent try to pull a fast one and lie to me in the Communion line—at least, not that I could tell. (And if they did lie while waiting to receive Communion, Someone Else will have to set them straight.)

Most children have been taught the right way to approach for Communion. But if a young child seems uncomfortable or awkward, or just too young, once again: just ask.

Embarrassing and hurtful moments like the one above really shouldn’t happen.