What We Stand For: Homily for November 22, 2015, Solemnity of Christ the King 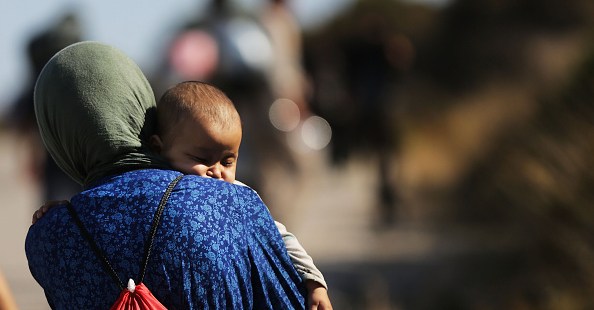 <> on October 16, 2015 in Sikaminias, Greece.
Share
Print
Deacon Greg Kandra - published on 11/21/15
This feast we celebrate today, Christ the King, has an interesting history: it’s relatively new—it was only added to the Church calendar in 1925—and in the 1960s, Pope Paul VI actually changed its name. He formalized its title: it is now officially the “Solemnity of Christ the King of the Universe.”

The meaning is clear: all of creation, in this world and beyond, is subject to Christ. No one, and nothing, is greater.

But looking at the news this past week, I wonder how many people understand that. How many Christians really believe that?

Read the headlines. Scan social media. Check the comments on Facebook or Twitter. Listen to our politicians. The overwhelming sense you get is that many today are not ruled by Christ the King.

They are ruled by something else. By fear. By mistrust. Some are even ruled by hate.

I’m speaking of the current debate about refugees in the Middle East.

Right now, there is a loud chorus of people who believe we need to wall off the world. Turn away refugees, those who are fleeing violence and terror. Better yet, only admit people to this country based on their religion—only give shelter to those who are like us.

This needs to be said: This is not who we are. We are Catholic Christians. We stand for something else.

We stand, in short, for life.

This feast could not come at a more important moment. This is the time for us to profess our allegiance — but not an allegiance to fear or exclusion or mistrust or hate.

Those cannot rule us. We already have another ruler.

The world must know: We are Christians. Our King is Christ.

How do we reflect that? I’d like to suggest three ideas.

First, we believe the truth of what our King taught. We follow his greatest commandment: “Love one another.” We honor his teaching: “When you welcomed a stranger, you welcomed me.” And we take courage and consolation from four words he repeated again and again—the words that banished all fear and helped turn a small movement of frightened apostles into a worldwide phenomenon that even now is driving out doubt and affirming hope.

Those four words: “Do not be afraid.”

We are not afraid. We are Christians. Our King is Christ.

Secondly, in professing our allegiance to our King, we cherish the teachings of his holy Catholic Church on earth. The greatest teachers have shown us the way.

In our own lifetime, Pope St. John Paul offers one example. He wrote:

“The tragedy of refugees is ‘a wound which typifies and reveals the imbalance and conflicts of the modern world.’ It shows a divided world that is far from that ideal according to which ‘if one member suffers, all suffer together’. The Church offers her love and assistance to all refugees without distinction as to religion or race, respecting in each of them the inalienable dignity of the human person created in the image of God.”

This is who we are. We see “the dignity of the human person created in the image of God.”

We are Christians. Our King is Christ.

Thirdly, we live with this humbling, overwhelming truth: our King was one of us.

He suffered. He hungered. He worked. He wept. He bled.

And: he was a refugee.

Two years, ago on the Feast of the Holy Family, Pope Francis reminded the world that the Holy Family was made up of three people seeking refuge from a ruthless dictator bent on murder. The pope said:

“As we fix our gaze on the Holy Family of Nazareth as they were forced to become refugees, let us think of the tragedy of those migrants and refugees who are victims of rejection and exploitation.” He called on us to be present to all who are exiled, especially in our own families.

This is who we are:

We help those who are helpless.

We protect the innocent being persecuted.

We seek dignity for those who have had it taken away.

And we remember that all those things happened to Jesus, our King.

Some years back, I read an interview with a sister in Iraq. She described the horrific shelling her village had to withstand during the US-led invasion in 2003. The neighbors who lived near her convent were all Muslim. They were terrified. The sisters let them stay in the convent, where they would be safe, and even opened one of their rooms for the Muslims to use for their daily prayers.

As the sister explained: “We don’t help them because they’re Catholic. We do it because WE are.”

We are. We are Christians. Our King is Christ.

Friday, our friend Bishop Ed Sharfenberger of Albany issued a statement on the refugee crisis. While acknowledging that national security remains a priority to our political leaders, he also made this important point: we cannot give in to xenophobia or misplaced blame.

“As we prepare to celebrate Thanksgiving,” he wrote, “gathered around tables laden with food and family and faith, we simply cannot turn our backs on those who have lost everything, in some cases their lives, because of their faith. We are one, and when we forget that, we slip dangerously toward becoming more like the people we fear than the people we were created to be.”

We were created to be something more.

Let this, then, be our prayer: that we remember what we are called to be—and that we remember The One we serve. That we strive always to do him honor. That we reflect the gospel he taught us and the example he gave us. That we see the dignity of every human life.

Let the world know this: We stand beside the weak and the helpless, the persecuted and forgotten, regardless of race or religion. In the present crisis, we stand where we have always stood. We stand for life. We stand for hope.

And we do it for this reason.

We are Christians. Our King is Christ.