CHILLING: Watch “The Last Downer” hear how much money he ‘costs society’ 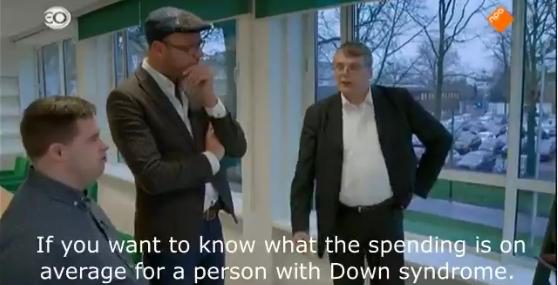 The Last Downer/Screencap
Share
Print
Elizabeth Scalia | Dec 14, 2017
Recently Iceland boasted that it had all-but “eliminated” Down syndrome in that country, not through scientific research, but through death. As actress Patricia Heaton writes, “They’re just killing everyone who has it”.

Exactly. Remember the words of Granny Weatherwax: Sin starts by treating people as things. In this case, the Icelandic government, and society, has determined that some categories of humans are just “things, imperfect” and easily disposed of.

Now, from The Netherlands, at the request of a television show called The Last Downer, we watch as Sjoerd, a man with Down syndrome, is told precisely what he and his similarly-chromosomed friends are costing Europe, in hard dollars and cents: $48,000 Euros, per “Downer” per year.

Sjoerd’s companion says, “That is a considerable amount, but it is high when compared to “normal” persons?

“So you could say that Sjoerd is almost 10 times as expensive than we are. …Is there another group in the Netherlands that approaches that amount?”

Oh, yes. If you look at elderly people with dementia, living in facilities, “you will come to see these numbers.”

It’s all very “civilized” and yet about as cold-blooded a thing as I’ve ever seen.

We can see where this is heading, right? Again? The most vulnerable people are always at risk when a society starts to look at human beings as numbers in a ledger, and defines its morality by the bottom line.

Something more to think about and meditate on, in these days of Advent: What is the value of the human person? What is God’s answer to that question? Seems some people really, really need to hear it.