What is an annulment? How is it different from divorce? 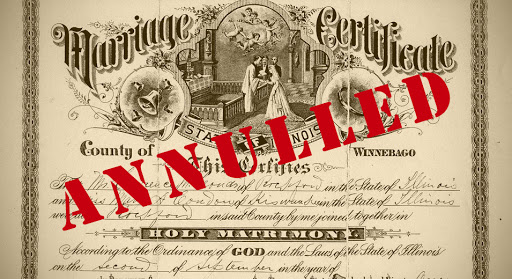 ALETEIA
What is an annulment? How is it different from divorce?
Share
Print
Caitlin Bootsma - published on 04/10/13

What God joins together, no man can separate. So how can there be annulments?

Annulments are too easily billed as “Catholic divorces.” Clearly, some think that while Catholics profess to believe that marriage is for life, the Church still provides an out. This misconception comes from a misunderstanding of sacramental marriage. While civil divorce ends a marriage that was an agreement between two people, an ecclesial annulment proclaims that a sacramental marriage never existed.

Marriage in the Catholic Church is a sacrament, and therefore not only an earthly reality, but also a spiritual one. Unlike any other sacrament, in the Sacrament of Matrimony, the two spouses are the ministers. Marriage is based upon a husband and wife's free consent to enter into matrimony, with full knowledge of what marriage entails, and God seals that bond. The Catechism of the Catholic Church teaches us that not only won't the Church grant divorces, but that she actually can’t: “Thus the marriage bond has been established by God himself in such a way that a marriage concluded and consummated between baptized persons can never be dissolved. This bond, which results from the free human act of the spouses and their consummation of the marriage, is a reality, henceforth irrevocable, and gives rise to a covenant guaranteed by God's fidelity. The Church does not have the power to contravene this disposition of divine wisdom” (1640).

An annulment is a recognition by the Church that a marriage never actually took place, due to an impediment at the time of the wedding. Even though the vows were said and witnessed, this does not always mean that a sacramental marriage took place. Some impediments to marriage include:

(This list is not exhaustive; more detail and other impediments can be found in the Code of Canon Law.)

Many times, annulments are based upon one or the other of the spouse’s lack of true consent to commit to all that Catholic marriage entails. Whether that means they were not open to life, they never intended to be faithful nor to be married until death, they were not freely consenting to a sacramental marriage.

Christ said “what God has joined together, no human being must separate” (Mark 10:9). And while there are circumstances where married couple may need to live apart, the Church cannot grant divorces. Rather, through diocesan tribunals, the Church goes through a process to discover whether or not a valid marriage took place or not. If it is uncovered that impediments existed at the time of the wedding, an annulment is given, recognizing that the marriage is null.

Persons who wish to begin the process of seeking an annulment should contact their parish priest.