Gay Marriage: The French Resistance Explained to My Foreign Colleagues 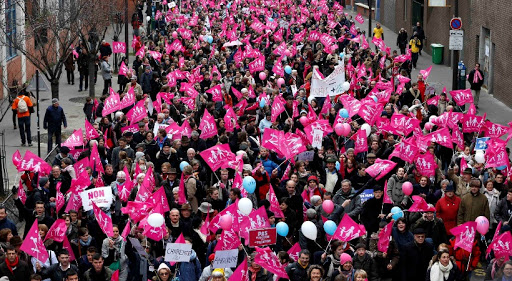 For months, especially in the French edition of Aleteia, you have been following the events of the so-called “Marriage for All” law that the President of the Republic unfortunately just promulgated.

You are struck by the magnitude of the national and regional demonstrations that have marked the debates, that continue almost every day in different parts of France with “La Manif pour Tous” (“Demonstration for all”) and the “Watchmen” movement, which will culminate next Sunday, May 26, with a new national “Demonstration for All” in Paris.

Despite the French Interior Ministry’s rather inglorious attempts to minimize these events by publishing statistics out of step with what the photos and videos show, these are the largest street demonstrations held in France since the ones that saved scholastic freedom from a socialist government in 1984.

But at the time, the other President François (Mitterrand) decided that a protest of such magnitude made it impossible to enact legislation that would bring an end to educational freedom. The current President François (Hollande), who has broken all the unpopularity records for a Head of State under the Fifth Republic, did not have this wisdom. On the contrary, he rushed to enact the law opening marriage to same-sex couples after its approval by the Constitutional Council.

So since the die is cast and gay “marriage” (deceptively called “marriage for all”) was adopted without appeal, why keep fighting? What solution can the protest movement find when the vast majority of demonstrators and their spokesmen want to stay within the framework of legality and non-violence?

In truth, no one can predict the future. It is certain, however, that what we are seeing in France is an unprecedented insurgence of consciences.

It is a deep, motivated, non-negotiable, and massive refusal of an unjust and totalitarian law, since this law seeks to abolish the sexual difference in marriage and would mean that a child can have two men or two women for “parents,” and if a child is adopted, he can be denied the right to have a father or a mother. No law has the power to deny sexual difference, the otherness of men and women, and the complementarity of a father and a mother. No one can deny a child the right to have a father and a mother.

It is also a categorical “no” to medically assisted procreation and surrogate motherhood that inevitably follow the adoption of the law in the name of equality, paving the way for all kinds of commercial manipulations of the human body.

The rejection of the underlying “gender” ideology (already in our school curricula) would impose the belief that male and female sexual identities are socially constructed, necessarily from another era, and that they are not natural and immutable facts rooted in natural law.

Finally, it is the refusal of a law that, far from being an improvement for homosexuals, will generate homophobia by holding them responsible for an alleged “right” to a child, which will create fatherless or motherless children.

As Mrs. Taubira, the Justice Minister whose name is attached to this new law and who will forever be tainted by it, has said, this is the “change of civilization” that she seeks to establish and that many French people of all ages, beliefs, and conditions absolutely refuse. No parliamentary majority can arrogate to itself the right to change civilization!

Alas, this refusal, explained peacefully and at length, encountered a wall of contempt and arrogance in a government and a parliamentary majority that are convinced they embody “progress” and believe themselves to be within “the meaning of history.” We have long been familiar with this kind of stance in France, as those in power dream of being the worthy heirs to the “great ancestors” of the French Revolution. We know what kind of tyranny it can lead to, so we have learned to fight it.

So, for over two centuries, French society has produced “antibodies” to resist the deadly virus that ideologues attempt to inculcate as soon as they come into power. In past times, for example, it was the Jacobins who were only a small minority of citizens – the most extreme and least scrupulous. Today it is the gay lobby, an ultra-minority that is far from representing all homosexuals, but which is very present in the highest levels of political and media power.

These healthy “antibodies” that French society is releasing again come most of all from families, the basic cell of society, and are relayed by “intermediate bodies” such as the National Union of Family Associations, the Academy of Medicine, or the Academy of Moral and Political Sciences, each of which, in their respective areas of competence, expressed their opposition to the Taubira law. Religions also play a fundamental role in this critical reflection, especially the Catholic Church, the expert in humanity that enlightens consciences while leaving Christians the liberty to choose from a number of legitimate political solutions, provided it does not go against the principles of Christian action.

The novelty for the Church in France is that many bishops have dared to speak out in the public forum (some of them have even taken part in the demonstrations), and they found a listening ear and an unprecedented response among young Catholics from the John Paul II, Benedict XVI, and Francis generations. The effectiveness of the messages of all these Christians relayed through the social networks (another new phenomenon) is one of the factors that has most surprised the government.

The judgment of experts – theologians, philosophers, lawyers, psychologists, sociologists – supports and reinforces the deep impression of a growing proportion of the French population that believes successive generations can only be based on the recognition of human nature. This nature is not to be invented or reinvented as if man were the measure of all things, but rather received as a gift to protect and nurture. Culture must respect the nature from which it blossoms.

Therefore, this issue goes beyond the fight against gay marriage. It is a real growth of awareness of the crucial importance of human ecology for our society.

This new underhanded and deceitful attack against human nature committed, moreover, by the public authorities will create a genuine surge in public opinion. It is almost as if we are just discovering the importance of sexual otherness, marriage, filiation, and family, which is the cradle of love and life, education, and solidarity, and the source of all of society’s human and economic resources.

Of course, the opponents of the Taubira law remain hopeful that the protest on Sunday, 26 May will be of such magnitude that this law, which has already been passed and promulgated, will eventually be removed or not applied.

But even if that hope is to be disappointed, the movement will not stop working: the protest against this immoral law, the defense of children, the support of mayors who will be condemned as conscientious objectors, and the protest against the indoctrination of students to the theory of “gender” will continue to be pursued and organized across France – insofar as other “libertarian” (and draconian) laws on the family, bioethics, and other areas follow suit.

It is also likely that this movement of constructive opposition will internationalize. The scourge that the French are facing today will soon become rampant in other countries of the world, in Europe and elsewhere.

It is up to you, dear colleagues, to relay our message in your language. In order to defend and promote human civilization and ecology, men and women of all countries – join with us!


*Editors of the Aleteia editions in Spanish, Portuguese, Italian, English, and Arabic.