Hope Dwells in the Darkness 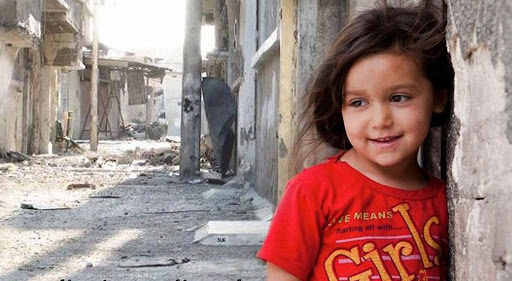 With up to 100,000 dead and millions displaced, Syria is an inferno of bloodshed, chaos and unthinkable terror.

Yet despite the atrocities that torment this suffering land, there is a beacon of hope; a light gleaming in the encompassing darkness. Christ is present.

His light dwells in the hearts of the priests, brothers and sisters who have gallantly stayed behind, facing formidable dangers to tend to their friends in need; who, instead of giving up or turning to revenge, have chosen to love.

Their courageous work is made possible thanks to the help of agencies like Aid To the Church in Need (ACN) who tirelessly endeavour to support their brother and sister Christians in places of suffering, offering financial support and more importantly, sustainment through prayer.

John Newton, spokesperson for ACN talks to Aleteia about the reality of the Christian situation in Syria and the bravery of the people who are risking their lives to bring the love of Christ to their fellow men.

“Christians are being targeted and attacked within the chaos which is the civil conflict in Syria” says Newton. “People are living in absolutely terrible conditions; many of the buildings have been hit by mortar fire, money is scarce, the normal economy has completely stopped. It’s a dire situation.”

ACN: a source of relief

“Being a Pontifical Foundation of the Catholic Church, we work through the local church” explains Newton. “The local priests and the local sisters and brothers all run projects, many of which are being backed and supported by ACN.

“There are 3 strands to the work that we’re doing: the first is to gather finance so that people can continue to fulfill their projects; the second is about getting information out to people, because a lot of time they don’t know a lot of what is really happening out there; the third is to ask people to pray.”

A large amount of ACN’s aid involves crisis funding in Syria. “This includes more than a quarter of a million euros in emergency help for displaced Christians,” he says, providing “things like food, blankets and medicines.”

In addition ACN endeavours to help the church continue it’s life as normally as possible, through a variety of projects. “We are helping with schools” he says, “so that the education in church schools can continue; we are helping with continuing the formation for seminarians and novices, as well as providing help for catechetical work, especially with younger people.”

ACN also provides stipends for the priests in Syria so that they can support themselves and their flock.

“These priests are just pouring out the little that they have, and pouring out their lives in service of the people” he says. “It is just so inspiring.”

Newton also emphasises the importance of the spiritual dimension to their mission which lies at the heart of all that they do, sustaining workers and victims alike, in the peace of Christ.

“All these situations need an awful lot of prayer” he says, “and the people in the countries that we speak to are very grateful to know that the benefactors over here are praying for them in those terrible situations; it gives them a great amount of comfort and hope.”

Newton goes on to talk about the dreadful reality of Christian persecution in Syria. “There are extremist groups and they are targeting Christians” he states. Such a blatant oppression has been evident throughout this bloody conflict.

“The first inkling we got of this was back in March 2012” he explains, “when it was reported that shortly after Homs had seen an exodus of reportedly more than 120,000 Christians fleeing the city, Islamist militants from the Farouk brigade went from door to door in two Christian neighbourhoods demanding that the Christians leave immediately.”

When Mr Newton’s colleague, John Pontifex, visited refugee camps in Jordan at the end of 2012 he met Naseem and Noora Enser from Damascus.

“They said that they had specifically fled because the Christian community was being targeted by Islamic extremists” remarked Pontifex. “They described how their priest, Fr Fadi Haddad, was kidnapped and killed. His body had been dumped on the roadside and was so badly mutilated that it was very difficult to recognise. Shortly before Easter 2012, the extremists went through the Christian areas shouting “Don’t celebrate Easter otherwise you will be killed like your Christ.”

Noora explained that “Christians were told to convert or die.” She appealed to ACN for prayers: “Please pray for us” she said, “we have come here with very little. It is thanks to your kindness that we have hope for the future.”

Her husband Nassim illustrated how hard it is to know who was targeting them, “but we do know that Christians are being hit hardest and first” he said.

“The country is in such chaos at the moment” explains Newton, “you have got factions certainly within the rebels, and possibly within the government force, who do subscribe to an extremist Islamic theology, who have a vendetta against Christians, and are using the chaos and conflict as an attempt to drive them out of certain areas and target them.”

Hope dwells in the darkness

However Newton tells of a hope; a talisman burning brightly amidst an abyss of terror.

And He breathes His peace and healing love into the harrowing wasteland of Syria, through his humble servants and Mother Church.

“The Church tries to make sure that for the people who remain in those areas, life can carry on as normal as possible” says Newton. “There are religious brothers and sisters carrying out pastoral work in a number of parishes, teaching catechism, running youth groups and other Christian fraternities, helping life to go on and to continue with whatever semblance of normality and dignity that they can.”

He describes their work as “heroic”.

He says “the things that they are doing are very small things, but what Mother Teresa called ‘small things with great love.’ They are the presence of Christ in a terrible situation, and it’s those small things, helping everyday life to continue, that I think is so remarkable.”

He refers to a letter written to ACN last week by one of these humble heroes – a priest running one of their centres, distributing emergency aid in Homs (his name cannot be released for safety reasons):

“The security situation has intensified over the past couple months in Homs and many explosions have happened over the last few days. The most recent was a car bomb outside our Church and centre. Eleven people were killed; five of them were our neighbours and parishioners. The result was very painful.

"A week ago many missiles fell into our quarter and we lost a child from our centre; he was just 10 years old. Three other children were injured.

“At the same time two Christian villages were abandoned. The first,‘Om sharsho’, had nearly one hundred Christian families and the second, ‘al Doeer’, had eighty Christian families. Nearly all of the houses and two churches were destroyed and the remaining houses were looted.

“Still, we proceed with our humanitarian work and in our centre we serve more than 6,000 displaced and damaged families. They all need help because of the high cost of living, people cannot afford basic amenities due to inflation. They need food, to pay rent, buy medicine, so it requires much work and money.

“Even though most of the churches were damaged…most of the priests have returned to Homs…but at the same time they need help because they are also displaced, they have no income so they can’t serve the church as they usually would. Churches and priests are suffering with the people.

“Yet we have a great hope. Churches still ring bells for prayer and all people come and share Mass. As the holy Pope Francis says “nobody can steal our hope and joyfulness.”

Newton marvels at such a witness of faith, “they are speaking of a great hope” he says, “of the church being a place of great hope, a witness to the hope of Christ.”

Is there a future?

However in considering the future for Christians in Syria, Newton’s perspective was chillingly bleak. “Whatever happens, the outlook for the Christian population in Syria is not looking at all positive” he says.

“If we see conflict escalating, which is a possible outcome if the West decides to arm the rebels, we will see more bloodshed and death on both sides, and that will affect everyone, Christians, Muslims, Jews alike. It doesn’t look like there is going to be any quick resolution to the problems.”

Yet he stresses that “the Church is going to continue helping out as best as it can in these horrific conditions, for as long as it possibly can.”

So what can we do? Mr Newton calls us to join ACN in prayer.

He quotes the words of Bishop Antoine Audo of Aleppo, who came to visit ACN in the UK last September:

“ACN does not only give money but you pray for us, and with us. With you we experience communion in the Church…With ACN we feel we are not alone. It’s very important. All Christians in Syria need to feel in those difficulties that Christians around the world are with them, thinking of them, supporting them.”

Newton concludes by inviting Christians around the world to unite in prayer for our suffering brothers and sisters in Syria. “It always deeply touches them to hear that we are not only thinking of them, but raising our hands in prayer to God for them, and it gives them and us a sense of bond and spiritual fellowship, that one part of the body of Christ is praying for another part of the mystical body of Christ.”

United in prayer. United in Christ.

To find out more about the work of ACN, click here