The Greatest Period in Church History for Popes 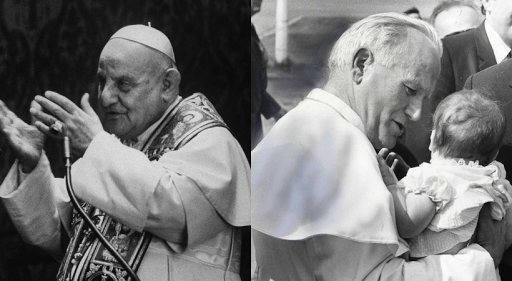 On the same day the Vatican released Pope Francis' first encyclical Lumen Fidei ("the light of faith"), the Vatican also announced that Pope John XXIII and Pope John Paul II would be canonized by the end of the year. A second miracle was approved for the canonization of John Paul II, but for John XXIII, Pope Francis chose to wave the requirement of a second miracle. We asked our Aleteia Experts what they thought about the news.

Held in High Regard

"John XXIII and John Paul II exemplified the same thing–a creative, faithful response to the grievous challenges faced by the Church," Catholic author John Zmirak told Aletiea, "one that rebukes modernity's mistakes but also learns from it. They avoided both relativism and rigidity, walking a tightrope between opposing errors. That's what the Church always strives to do."

Fr. Michael Heintz points to their leadership during trying times. "[B]oth led the Church on earth during truly dramatic days: John XXIII intervened, for example, during the Cuban Missile Crisis and shepherded the People of God through the beginnings of the 1960s ferment. John Paul II was (we now know more clearly than ever) instrumental in dismantling the Communist regimes in Eastern Europe and he did so through both cagey diplomacy and valiant moral courage and witness — and without ever advocating violence."

"[John Paul II's] commitment to the cause of life was not an abstraction," Fr Frank Pavone, director of Priests for Life, told Aleteia. "It was palpable. What we read in the encyclical Evangelium Vitae (The Gospel of Life), which he considered to be one of the most important of his writings, came to life in meetings with him."

"It was a conviction and a passion that combined mercy and strength, the willingness to confront secular power and the ability to pick up the pieces of broken lives. Whether speaking with him about the help that has to be given to those who have had abortions, or the need to declare that laws allowing abortion are in fact invalid as laws, he was equally strong, and it was clear that what he was saying was coming from his very being, not just from an intellectual grasp of the issues."

Our experts acknowledged that there were problems in the Church during their pontificates, but agreed they thought John XXIII and John Paul II responded as best they could.

"The sex abuse scandal in the Catholic Church did take place while these two men were 'in charge' of the Church universal so they should bear some responsibility. Like all people, saints included, the standard is not perfection, but faithfulness," Allan Wright, Academic Dean of Evangelization for the Diocese of Paterson, NJ, told Aleteia. "In looking at the early church we read of scandal with almost every Christian community St. Paul writes too. He wrote to them in order to clarify what the teaching of Christ is, theology, is and then to explain how one ought to act, morality. Pope John XXIII and John Paul II did the same."

Anthony Esolen, literature professor at Providence College, thinks the blame for some of the problems should be spread throughout the episcopacy. "I'm not saying that John Paul II could not have acted more swiftly and decisively. He trusted his bishops too much — the very same bishops who typically griped at him behind his back for supposedly being authoritarian."

Catholic writer and lecturer James Likoudis also placed some of the blame on the episcopacy in general. "Too often ignored was the failure of collegiality during the turbulent post-conciliar disorders as too many Bishops ignored the tidal wave of rebellion within the Church and the onslaught of those who had made shipwreck of the faith." He also says that "a flood of documents from the Popes of the 20th century, the Congregation for the Doctrine of the Faith (CDF) and other Roman Congregations cannot be ignored in the effort to correct trendy theologians who did their part to eliminate the remnants of Western Christendom."

Liberal, Conservative, or Neither?

Though some observers portray John XXIII as more of a "liberal" and John Paul II as more of a "conservative", all of our experts rejected the categories being applied to them.

"It's my view that the terms "liberal" and "conservative" are not very helpful or constructive categories for giving an overall assessment of either pope, or any pope, for that matter," Paul Gondrea, professor of moral theology at Providence College, told Aleteia. "These terms are too often overladen with political overtones, or too often mark attempts to fit the Holy Father in a box, to serve in saying something instructive of either Holy Father. And this is because Catholic doctrine itself is neither 'liberal' or 'conservative.'"

He continued: "In truth, as Catholic doctrine itself is much grander than any category we can try and squeeze it in, so too is either Pope John XXIII or Pope John Paul II, whose pontificates at all points sought to uphold Catholic, too large to have a cheap label like 'liberal' or 'conservative' attached to him."

Joseph Pearce, Writer-in-Residence and Professor of Humanities at Thomas More College, agrees. "The terms 'liberal' and 'conservative' are not applicable to either of these popes. Catholics, including popes, are either orthodox or heterodox. Both of these popes were resplendently orthodox and, what is more, practiced the Faith that they preached."

Esolen points out that both taught the same faith. "Both Popes were profoundly orthodox; on no important doctrinal or moral issue was there a dime's worth of difference between them."

"I remember seeing Pope John Paul II at Madison Square Garden," Zmirak told Aleteia. "Encountering the man helped me shuck off the modernist nonsense my religion teachers had been trying to fill my head with. He was not the ignorant Polish reactionary peasant they taught us about."

Gondreau says he was also impacted by John Paul II as a young man. "I recall being a freshman in highschool when John Paul II was elected pope. There was such excitement and wonder at the election of the first non-Italian pope in centuries. And immediately John Paul II captured the hearts and admiration of the entire world. It didn't hurt that he quickly and very ambitiously set out to visit his flock around the globe. There was such great hope and such great optimism. […] It was palpable even to this American high schooler."

Pearce, a convert to the faith, talks about how John Paul II impacted his new faith: "I first saw him during a general audience in Rome in 1990, only a year or so after my reception into the Church, and was greatly edified by my attendance at World Youth Day in Poland in the following year. I also recall being part of a Corpus Christi procession in Rome in around 1995 and attended World Youth Day in Rome in 2000.

"The last time I saw John Paul II in the flesh was at the canonization of Gianna Beretta Molla and several other saints in 2004. His example during the early years of his papacy, especially in his fight on behalf of those enslaved by the secular fundamentalist regimes in eastern Europe, was very important to my own conversion to Catholicism in 1989. Like so many others, I owe a great deal to JPII."

Wright was encouraged by John Paul II's visits to the US. "I was present during all the World Youth Day festivities in Denver, Co in 1993 which was life changing," he told Aleteia, "yet the Mass Pope John Paul II celebrated on Oct 7th, 1995 at Central Park in New York City was much more intimate. Perhaps it was because I went by myself and not in a group that I felt it was intimate in the midst of 125,000 people.

A Unique Time in Church History?

While Zmirak doesn't dispute the holines of John XXIII or John Paul II, he thinks "the process of canonization was unduly rushed": "We have had a good run of holy popes. But we are also rushing to judgment, and allowing sentiment to overpower the Church's traditional process of discernment. Here's a good rule: don't canonize anyone (except perhaps a martyr) whom anyone living has fond memories of, and don't let the men a pope appointed handle his canonization cause."

Fr John McCloskey, a Research Fellow of the Faith and Reason Institute in Washington DC, is convinced the Church has been in a special period of her history for Popes. "Speaking as a Church historian, I say with complete confidence that Starting with Pope Pius XII up to our present pope we are in the greatest epoch of popes in history above all due to their Holiness."

Esolen goes even further. "We have not had a bad man for Pope since the Council of Trent. We have had plenty of bad presidents, kings, queens, premiers, first citizens, party chairmen, and other addled heads of state, but not one bad Pope in about 500 years."

Paul Gondreau teaches at Providence College in the areas of moral theology, with an emphasis on marriage, Christology, and sacraments, with a specialization in the thought of St. Thomas Aquinas, and he is Faculty Director of Providence College Center for Theology & Religious Studies. He is also an associate editor of the journal Nova et Vetera.

Fr. Michael Heintz is a priest with the Diocese of Fort Wayne – South Bend and rector of St. Matthew Cathedral in South Bend. He received his Ph.D. in 2008 in Latin and Greek Patristics from the University of Notre Dame.

James Likoudis is a former College Instructor in History and Government. He is a writer and lecturer on Catechetics, Sex Education, and Liturgy.

Joseph Pearce is an English-born writer, and as of 2012 Writer-in-Residence and Professor of Humanities at Thomas More College of Liberal Arts in Merrimack, NH. He is a co-editor of the St. Austin Review and editor-in-chief of Sapientia Press.

Fr. C. John McCloskey, III is a priest of the Prelature of Opus Dei. He currently is Research Fellow of the Faith and Reason Institute in Washington DC.

Allan F. Wright is the Academic Dean of Evangelization for the Diocese of Paterson, NJ.