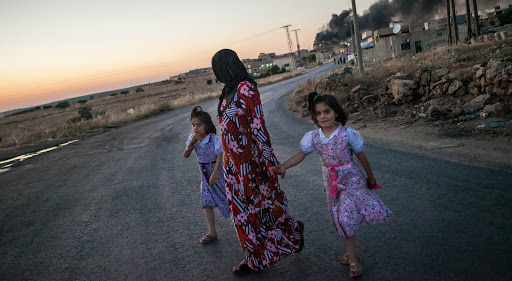 A Syrian woman who works in a center for children opened during the country's civil war said that the smile of just one of these children is enough to keep motivating her and her colleagues.
“It is difficult to change this reality and to return to them their smiles and their joy; but the smile of one child is always enough to give us energy and support,” reflected Claude Semaan, one of the first volunteers to set up an educational center for the Jesuit Refugee Service in Homs, Syria.
“We all support each other here,” Semaan told CNA July 10.
She began working with Al Mukhalis Center, an educational center for children aged six to 12, on April 16, 2012, about a year after the Syrian crisis began.
The crisis started in March, 2011, when demonstrations sprang up across Syria protesting the rule of the country's president, Bashar al-Assad. The following month, the Syrian army deployed to put down the uprisings, firing on protesters.
Since then, the violence has morphed into a civil war which has claimed the lives of more than 93,000 people. At least 1.7 million Syrians have fled to nearby countries, becoming refugees.
An additional 4.25 million Syrian people are believed to have been internally displaced by the war, their lives utterly disrupted.
In Homs, a group of volunteers opened the Al Mukhalis Center after a growing number of schools were shut down due to the violence.
“There was no security then, and we began working after feeling imprisoned in our homes for a whole year,” Semaan said. “We felt fear and frustration.”
She noted the educational project started “quickly and suddenly” because of the amount of children that began arriving at the center.
“We had to prepare the place and the equipment within just a few days, because we received 100 children,” Semaan remarked.
“We didn’t expect any children initially, but on the first day we were surprised to have 64 registered, and on the following day, 95.”
Semaan explained that the center decided to use more classrooms on the third day, although they doubted that so many children would attend because of the “disastrous conditions.”
“Parents and kids needed this center and they have placed great confidence in the local monastery, where we work.”
“We were scared and we felt we didn’t have enough experience, but we felt great energy within us,” she added.
“One day we woke up to the sound of shells and clashes, and the phone lines were dead,” said Semaan.
Despite the war raging around her, she went to the monastery she said, “because I was afraid that a child would come and find no one there.”
“But when I arrived, I found that all the volunteers were there because they had thought the same. And 82 children had come to the center.”
She underscored that when she asked the children why they came, “they replied enthusiastically, saying they would have come ‘even if the shells were over our heads.’”
“Even when there are dangerous conditions, we take advantage of it by going down to the bomb shelters and singing at the top of our lungs until it stops,” Semaan explained.
“We have a big responsibility because the school gives them joy.”
The young woman, who specialized in counseling university students, labelled the mental state of the children as “very bad” during the first days they began attending the center after their year long war experiences.
She explained that because of the crisis, it is too dangerous for many Syrian children to even attend school.
“When we asked one of the children the name of his street, he said: ‘I live in the street of death.'”
His response is not uncharacterstic.
“When we ask children to draw anything that is on their mind, they always paint about the war: (things) such as tanks, weapons and dead people.”
According to Semaan, even the songs they sing are about the conflict and the regime, and that it is often difficult to teach them songs about life and love.
In the face of such a situation, Semaan and the other volunteers with Jesuit Refugee Services continue to help the children who have come to Homs to live as normal a life as possible, providing them with both education and loving concern.

ally published at Catholic News Agency on 15 July 2013.  Used by permission, all other rights reserved.