How Liturgical Abuse Impacted the Family 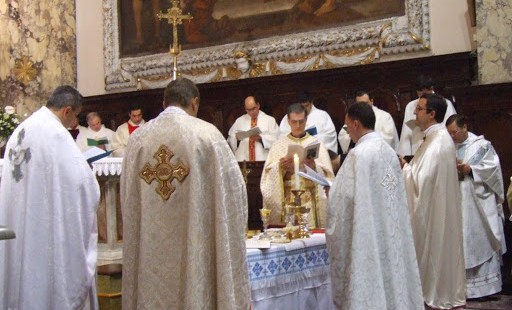 How can changes in the liturgy create an expectation of change in doctrines of the Church? There is a surprising correlation.

In the following article, Kurt Poterack, choir director and adjunct professor at Christendom College, shares his thoughts about how changes in liturgy can create an expectation of change in doctrines of the Church.  The Cardinal Newman Society sponsored Dr. Poterack’s attendance at Sacra Liturgia 2013 in Rome, where he joined hundreds of other participants in the conference aiming to study, promote and renew appreciation for the liturgy.  The Newman Society hopes to help spur on this liturgical renewal in Catholic higher education.

The connection between the Sacred Liturgy and the family may not be the most obvious thing, but two excellent papers on this topic were delivered at the conference on Friday, June 28th.

Monsignor Ignacio Barreiro Carámbula, the executive director of Human Life International’s Rome office, gave a talk on “Sacred Liturgy and the Defense of Human Life.”  He stated that “a man who does not adore God in the liturgy will not be grateful to God for his greatest gift – life.”   However, he spent much of his talk arguing that there was a connection between the rejection of Pope Paul VI’s encyclical
Humanae Vitae and the way the reform of the Sacred Liturgy was carried out in the 1960s.  In Monsignor Barreiro’s opinion, the rejection of Pope Paul’s reiteration of the Church’s teaching on contraception was at least partly the result of the radical changes that were already occurring in the liturgy.
The expectations of change in this central moral teaching were fueled by the liturgical changes or, as the Latin axiom puts it,
Lex orandi, lex credendi.  In other words, if the law of worship was so suddenly and radically to change, why not the law of belief?
Monsignor Barreiro also made the interesting point that the main reason to have children is “to populate heaven with more souls who will enjoy the eternal contemplation of God . . .but if the liturgy does not give us that beautiful contemplation of God, we are going to be less motivated to have children who will enjoy it.”  As those of us very sensitive to the beautiful have sometimes felt – at an exceptionally bad liturgical celebration (I must add!) – “if this is supposed to be a foretaste of heaven, then I am not so sure why I would want to go there . . . . ”
Professor Miguel Ayuso, a sociologist from Spain, gave a talk entitled “Sacred Liturgy as the Heart of the Life and Mission of the Family.”  His talk, which took for granted the importance of the family, touched on the nature and necessity of Christian institutions in a society.  He said that “there cannot be a Christian people without Christian institutions.”  His main point had to do with the tendency of contemporary thinkers, over the past fifty years or so, to criticize mere “practices” of religion.
While it is true that merely “going through the motions” is never good enough for a Christian believer, who has to worship in spirit and truth; nonetheless, there have to be “public motions” to go through.  The Catholic religion is an incarnational religion, a religion that has to be manifested in the public square.  It is a religion of processions, feasts and solemnities.  It is neither a religion for angels nor for private individuals.   It has always been a Protestant tendency to belittle the physical/communal aspect of Christian life in favor of the individual having a private relationship with the Divine.
Finally, this is where the Catholic college and its role in the liturgical formation of the students comes into play.  Certainly Catholic students need to be taught right doctrine – both faith and morals – however, a non-traditional liturgy can set up a real cognitive dissonance.  If the liturgy and its music change to keep up with and reflect the times, why should doctrine not change likewise?  We are to be in communion with the Church not only throughout the world, but also through time.  Although some might disagree, I contend that one of the best ways for a Catholic college to teach students intuitively that we believe the same things about marriage and the family as in the 12th century, is to worship in continuity with the way Catholics did in the 12th century.