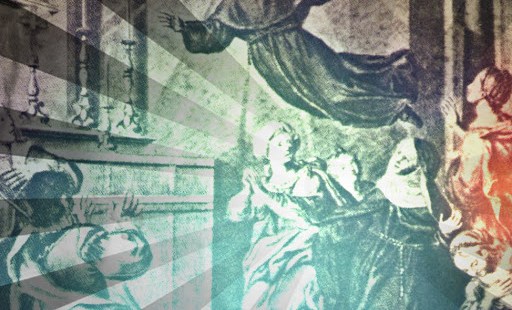 Sex and violence. Victory and defeat. Romance and miracles.

Anything Hollywood has ever produced pales in comparison to the great trove of stories – the true, the legendary, and those somewhere in between – about the great followers of Christ before us. If you think Catholicism in boring, you obviously don’t know much about the saints.

The first “saint” on this list is actually not officially recognized by the Church for the simple reason that he is a dog. That’s right: St. Guinefort, as he is known among his devoted followers, was a 13th century French dog who was apparently really holy and has been associated with all sorts of miracles.

Legend says his master, a knight, left his infant son in the care of Guinefort so he could go hunting (men do things like this). But when he returned, he found the house in disarray, the baby missing, and the dog covered in blood. In a fit of rage, the knight slew the dog – only to regret a moment later when he heard the cry of his baby. He found the baby safe under his bed, along with the dead body of a viper. The dog had saved the child from the predator, explaining why he had been covered in blood. The knight and his family set up a shrine to Guinefort, which became a pilgrimage site where families would bring their infants for healing or protection.

But don’t get too excited… there’s a reason you haven’t heard of the great St. Guinefort. The Church has repeatedly tried to put the kibosh on his cult.

St. Denis was Bishop of Paris during the 3rd century – and a good one at that! (Perhaps too good.) His preaching was so successful at converting people to the Christian faith (what’s supposed to be the primary job of any bishop, by the way) that the local pagans arrested him and had him beheaded.

But to their surprise, Denis picked up his head and walked away from the execution site preaching the Gospel. Needless to say, the whole beheading thing did eventually catch up to him and after about 6 miles he finally collapsed and died. A shrine was soon built on the site, which was later replaced by the current Basilica of St. Denis.

Think you love Jesus? Yeah, but do you involuntarily levitate in rapturous ecstasy any time someone mentions His name?

This was the blessing and the curse of St. Joseph of Cupertino. This 17th century priest and monk with mental disabilities had such a simple yet deep love for Jesus and the saints that he would go into ecstasy and levitate upon hearing their names, as well as during Mass and Liturgy of the Hours. He levitated in front of huge crowds during public processions and even during an audience with the Pope. He became a massive sensation among the populace and the large crowds that followed him became a problem. His superiors tried moving him from monastery to monastery, keeping his location a secret, but his location was usually discovered fairly quickly, and the crowds would return.

A movie was made about St. Joseph of Cupertino in 1962 called The Reluctant Saint. He’s the patron saint of air travelers, aviators, astronauts, and people with a mental handicap.

Agatha was the daughter of a 3rd century noble family in Italy. As a young girl, she made a vow of celibacy, dedicating her virginity to God. This was apparently hard to explain to a young pagan man who requested her hand in marriage. When he was rebuffed, he had her first sent to a brothel, then to jail. There, she was tortured, including having her breasts cut off. She eventually died in prison.

OK, there are lots of gruesome martyr stories, but the real reason I chose Agatha is because of a particular local Italian custom in her honor that involves making pastries in the shape of breasts and eating them. One website describes them as “a round, spongy cake covered in ricotta custard and marzipan, [u]sually [with] a cherry on top.”

Eating anything in the shape of a human body part is weird, including (especially?) breasts. I think I’ll pass.

And now for the number one, craziest saint story of all time…

1) The Girl Who Killed a Dragon – From the Inside

Born to a pagan family at the end of the 3rd century, St. Margaret of Antioch converted to the Catholic faith as a young girl through the influence of her wet-nurse and took a vow of celibacy. And yep, you guessed it – a pagan man, in this case a Roman governor, insisted on marrying her anyway. When she refused, he locked her up in prison.

And this is where things got interesting. In between torture sessions, Satan himself appeared to Margaret in the guise of a dragon and then ate her. Lucky for Margaret, Satan didn’t chew (just swallowed her whole) and she happened to have a cross on her. The presence of the cross began to irritate the Satan-dragon’s stomach. She then used the cross to cut him open from the inside and escape. If that’s not BA, then I don’t know what is.

Of course, there’s lots of crazy saint stories. So what did I miss? Tell me in the comments!