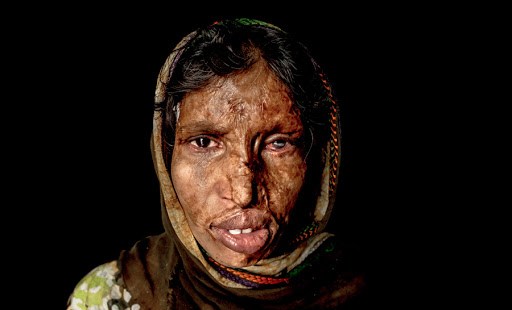 How could Pope Francis have kissed that monster of a man covered with warts and boils? How could he kiss that ugliness? And now, he has blessed and embraced another man with a horribly disfigured face.

Leprosy covers the face with boils, running sores, scabs, and grotesque deformities. Check out the before and after photographs of St. Damien de Veuster, the Belgian priest who spent his life serving the lepers on the island of Molokai who ultimately contracted the disease and dies from it himself.

What makes people embrace the horror? What makes people enter the darkest places willingly? What about St. Isaac Jogues, the Jesuit missionary whose fingers were chewed off by the barbaric Mohawks? After he escaped and made it back to France, he pleaded to return to the Mohawks, where he endured more unimaginable agony before being tortured again and beheaded.

Why did Damian de Veuster go to Molokai? He volunteered. Why did Isaac Jogues return to the Mohawks? He said he loved them. Why did Francis kiss a leper? Why did St. Catherine of Sienna kiss their sores? They saw beauty there. Why did Jorge Bergoglio kiss the diseased man and bless the disfigured? Why did they do such wildly outrageous things?

Were they showing off? Were they insane?

What these radically radiant people like Francis, Damian, and Isaac exhibit is something the Eastern Orthodox call theosis and Western Christians call “divinization.” We see shining in their lives the deep truth of the Christian message. They are not simply setting a good example. It’s more than that.

They have been transformed from the inside out. They have become fully alive. As the apostle Paul teaches, they have “grown up into the full humanity of Jesus Christ.” Divinization means a person has become like Christ. They see the world his way. They think his thoughts. They feel his feelings. They do what he did. They have become not just good men, but God-men.

Despite all the human failures, perverted priests, corrupt hierarchs, and the crowd of ordinary bad Catholics, this is still the beating heart of the Catholic faith – not just doing good, but becoming one with Goodness itself.

In the 3rd century, the theologian Irenaeus said, “The glory of God is a person fully alive.” The saints show us what that means. It is to be “charged with the grandeur of God,” as the poet Hopkins sang. The power and profundity of this thought stands all our expectations of religion on their head.

We thought being a Christian was all about obeying the rules, minding our P’s and Q’s, and trying to stay out of trouble. We thought if we were good boys and girls and believed all the fairy stories they told us and said our prayers every night and kept our pants on, we would be able to get into heaven one day.

Unfortunately, “humankind cannot bear very much reality,” T. S. Eliot mused. The fact is, most of us would prefer that our religion be a set of timid table manners. It’s safe that way. Christ the Tiger has been tamed, and Christianity has been de-clawed.

The idea that we might be completely transformed into all that we were created to be is too frightening. It sounds too much like what T. S. Eliot called “a condition of complete simplicity costing not less than everything.”

Pope Francis kissed ugliness because he wanted to, and that transformed desire proves that real, astounding inner change is possible.

Dwight Longenecker’s latest book, The Romance of Religion, will be published by Thomas Nelson in February. He blogs at “Standing on My Head” at Patheos.